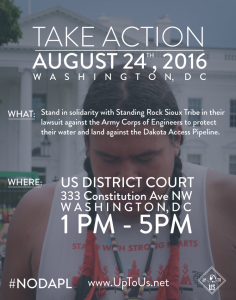 The growing protest against the highly controversial North Dakota Access pipeline will end up in court tomorrow in Washington DC, when the Standing Rock Sioux Tribe’s lawsuit against the US Army Corps of Engineers will be heard.

Anti-pipeline activists will also be holding a rally in DC to coincide with the court action and the Sioux Tribe are urging everyone who can to attend.

The Native Americans are challenging what they consider to be the Army’s refusal to conduct a proper survey of the $3.7 billion pipeline’s environmental impact.

The pipeline, which is similar in length to the controversial Keystone XL, will transport 570,000 barrels of fracked crude a day across the states of North Dakota, South Dakota, Iowa and Illinois.

The lawsuit argues “The construction and operation of the pipeline, as authorized by the Corps, threatens the tribe’s environmental and economic well-being, and would damage and destroy sites of great historic, religious, and cultural significance to the tribe.”

The protests against the pipeline have been growing in recent days with some 2,000 to 4,000 First Nations, environmental and community activists now at a growing “Spirit” protest camp at the confluence of the Cannonball and Missouri rivers in the path of the construction route.

Due to the protests, the construction of pipeline “has been halted at the protest site,” although building continues elsewhere.

The company behind the pipeline, Dakota Access, has also issued its own legal action trying to prevent protesters from blocking construction of the pipeline. A preliminary hearing had been due to be held this Thursday, but now the hearing has been put back to September 8.

In the meantime, yesterday the judge ordered that the two sides are “strongly encouraged to meet and confer in good faith” to try and resolve the issues out of court.

It is difficult to see how the two sides can reconcile their differences.

The rallying call for the Native Americans is “Water is sacred” and “Mni Wiconi” or “Water is life” in Lakota.

“There is a renewable alternative for that oil. There is no alternative for water”, one protestor told a local TV station. Another added: “None of our water comes from anywhere else. It is all from the Missouri river. We are scared. It is threatening not just us, but future generations.”

Kandi Mossett, an organizer with the Indigenous Environmental Network adds: “There are sacred sites out here, there are midden pile sites, historic sites. That is the main concern along with the protection of the water.”

Indeed, the protests are growing not shrinking as other tribes and environmental activists answer the call for help. “The last time the seven bands of the Lakota-Dakota-Nakota nation stood together was at the battle of the Greasy grass, June 25, 1876, so this is historic that they answered that call”, says First Nation, Jon Eagle Senior.

The Standing Rock Sioux Nation is asking for help tomorrow at the US District Court, 333 Constitution Avenue, NW from 1pm until 5pm. A rally starts at 1pm and speakers include: