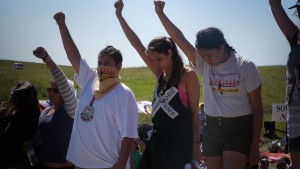 One of the most important battles against pipeline expansion in North America is happening right now in North Dakota.

The fight against the Dakota Access Pipeline symbolises so many things: the fight against climate change, the fight to keep oil in the ground; the right to clean air and water. But it is more, it is also a clash of cultures; Big Oil versus Native Americans; it is a fight to protect ancestral lands from pollution.

You may not have heard of it, but if you care about our future, it is time to get engaged and offer your support to those fighting the #DakotaAccessPipeline.

For the last few months the Standing Rock Sioux Tribe have been leading the campaign to stop the huge pipeline, which runs close to their reservation.

The $3.7 billion pipeline, which is similar in length to the controversial Keystone XL pipeline, will transport 570,000 barrels of fracked crude a day across the states of North Dakota, South Dakota, Iowa and Illinois.

The potential for major water pollution is huge, as the pipeline crosses the Missouri river twice, which is the tribe’s man source of drinking water, as well as over 200 smaller rivers and creeks.

In response to the pipeline’s approval, a coalition of environmental groups, ranchers, First Nations and farmers issued a statement which argued that it “undermines the Clean Water Act, the National Environmental Policy Act, the National Historic Preservation Act, and the Native American Graves Protection and Repatriation Act”.

They called for a halt to “all construction activities … until formal tribal consultation and environmental review are properly and adequately conducted”.

The Sioux have now filed a case in the District of Columbia to challenge the Army Corps to enforce their federally protected rights and interests. With other First Nations joining the suit, a hearing is set for next week.

But a week ago construction began on an access corridor to store pipes and other equipment ready for the construction phase. Since then it has been the First Nations who have been on the frontline of the non violent direct action protests.

As news of the construction spread, hundreds of people gathered at the proposed construction site.
Between 200 and 400 people arrived in total, some on horseback, others beating drums, close to the Sioux tribe’s reservation.

So far over a dozen have been arrested.

“We don’t want this black snake within our Treaty boundaries,” says Standing Rock Sioux Tribal Chairman Dave Archambault II, who has been one of those arrested. “We need to stop this pipeline that threatens our water. We have said repeatedly we don’t want it here.”

He continues: “We want the Army Corps to honor the same rights and protections that were afforded to others, rights we were never afforded when it comes to our territories. We demand the pipeline be stopped and kept off our Treaty boundaries.”

“We have a serious obligation, a core responsibility to our people and to our children, to protect our source of water,” he adds. “Our people will receive no benefits from this pipeline, yet we are paying the ultimate price for it with our water. We will not stop asking the federal government and Army Corps to end their attacks on our water and our people.”

The developers have now also filed a lawsuit in against the protesters, seeking restraining orders and unspecified monetary damages.

They have also taken other protests with Standing Rock youth beginning a run from the reservation to Washington DC, with a petition signed by 160,000 people. They returned home having run for 2,200 miles.

Celebrities such as Leonardo Di Caprio have also offered their support too. The Oscar-winning actor has said he is “standing with the Great Sioux Nation to protect their water and lands.”

But more help is needed. Two days ago Archambault II sent out a “call to action” to other First Nations:

“The Standing Rock Sioux Tribe stands in opposition to the Dakota Access pipeline as it threatens our way of life, our water, people and land. To all Native American Tribes in the US and to all Indigenous People of the world: we kindly ask for your support”.

If you want to get involved sign the petition on Change.org, which states, in part: “In Dakota/Lakota we say “mni Wiconi.” Water is life. Native American people know that water is the first medicine not just for us, but for all human beings living on this earth.”

To donate to the fundraising page go here or for more information go here or here.