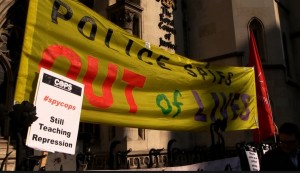 Here’s a simple question for you. Given the intense security pressures law enforcement agencies are under globally, why are the US authorities still wasting precious time and resources spying on peaceful environmental activists?

Last week, the Intercept reported that back in May when 300 protesters assembled in Colorado for an auction of oil and gas leases on public lands, “several of the demonstrators were in fact undercover agents”.

The story was based on emails obtained through open records requests which revealed that the local Police Department collected information about the protest from undercover officers as the event was being planned. During the auction, “both local law enforcement and federal agents went undercover among the protesters.”

The Intercept noted that the police monitored the groups participating in the “Keep it in the Ground” network such as 350.org, Break Free Movement, Rainforest Action Network, and WildEarth Guardians. The law enforcement agencies were relying on intelligence gathered by one of the largest oil and gas producers in the region, Anadarko.

“Despite a relatively uncontroversial protest” write Lee Fang and Steve Horn for the Intercept, “the tactics revealed by the emails, recent public statements, and other maneuvers suggest that the federal government is beginning to take a more aggressive stance toward the Keep it in the Ground movement.”

The Intercept’s great story is sadly just another example of the state spying on peaceful protesters. The US authorities have always seen the environmental movement as a threat, and its latest attempts to spy on the “Keep it in the Ground” movement is an extension of a strategy that has been going on for years.

Three years ago, the Guardian reported how the FBI had been spying on activists opposed to the Keystone XL pipeline, in violation of its own guidelines.

The truth is the FBI has been spying and trying to discredit environmental activists for decades.

Twenty years ago, I wrote the book Green Backlash – Global Subversion of the Environment Movement, that looked in part in how the FBI set out to “neutralise” direct action group such as Earth First! Activists were spied on, framed and even labelled as terrorists.

One of the most famous miscarriages of justice happened to Judi Bari, a new breed of Earth First! activist who was a key organiser of the “Redwood Summer” of 1990, a campaign of civil disobedience aimed at stopping the logging of ancient redwoods.

Bari and a colleague, Darryl Cherney, were blown up by a home-made pipe bomb under their car in May of that year. In the hours and days that followed, the pair were essentially framed by the FBI who tried to make the victims become the villains. The “bombing would be used as an unprecedented event to collate information and intelligence on environmentalists by the FBI”, I wrote.

Indeed you can trace the FBI’s antic’s against Bari back to the infamous director of the FBI, Edgar Hoover and his COINTELPRO programme which had started in the late 1950s which had used “classic misinformation, surveillance, psychological warfare, legal harassment, dirty tricks and infiltration” to spy on political and social activists.

The bottom line is that law enforcement has always misguidedly seen environmentalists as the enemy within.

Nor is the US alone in the way it treats environmental activists. The UK has been rocked in recent years by the activities of under-cover police officers, who whilst posing as fellow activists fathered children with protesters, or used the identities of dead children as cover.

There is currently a Public Inquiry into the undercover policing policy, with increasing calls for all the political groups that were infiltrated by the police to be made public.

Research by a colleague who works with the Undercover Research Group, reveals that the number of political, environmental and animal rights groups in the UK that have been spied on since the sixties by the Police is over four hundred and sixty. Some 120 undercover police spies have so far been uncovered.

Maybe its time for the Undercover Research Group, which has so far been focussing on Police spies in the UK and Europe, to extend its reach to the US.

It would be interesting to see what they found out.