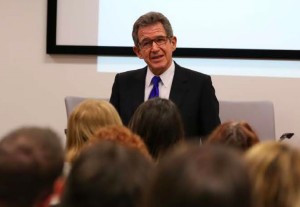 The man who famously rebranded BP as “Beyond Petroleum” has re-entered the debate over climate and oil by warning that oil companies face bankruptcy if they do not address the risks of global warming.

Lord Browne, former BP chief executive and one of the most influential oilmen of his generation, has warned his fellow compatriots at Big Oil that unless they invest more in renewables, they risk going the way of Peabody Coal into bankruptcy.

Speaking to the Financial Times newspaper, Lord Browne said: “Traditional energy businesses should reflect carefully on the bankruptcy of Peabody coal. Great companies do go into difficult times when they have a product that people don’t want.”

He added: “If they are not involved in that change in a productive way, they will be made to do so.”

Browne famously spent hundreds of millions re-branding BP “Beyond Petroleum” at the time of the Millennium, but critics always argued the change was more about marketing and branding than any real significant shift within BP to move out of fossil fuels.

Indeed, BP pulled out of its solar business a decade later in 2011, something Browne regrets: “I am sorry that BP got out of the renewables business,” he told the business paper.

Despite Browne’s warning, the oil industry still sees climate change as a threat rather than an opportunity. Although several European energy groups pledged to combat climate change in the run-up to a UN summit on the issue last December, there has been little action and no US oil companies even bothered making that meagre commitment.

Indeed, at Exxon’s AGM last month, the company’s CEO, Rex Tillerson, said that cutting oil production was “not acceptable for humanity” before adding “The world is going to have to continue using fossil fuels, whether they like it or not.”

Whereas Tillerson was always a die-hard Texan oilman, Browne was always seen as a more of a sophisticated reformer within the industry.

However, the interesting thing is that what Browne is saying is nothing new. Activists and analysts have been saying the same thing for years. The oil industry has to change its way or risk oblivion. And they and their share-holders will lose a lot of money in the process if they don’t.

In a related article on the FT, Paul Spedding of the Climate Tracker Initiative, a think-tank that has promoted the concept of stranded assets, says simply: “That is the real risk climate change poses for the industry: over-investment, followed by oversupply, followed by value destruction via price.”

But instead of forging the clean energy transition, Big Oil is still betting that consumers will carry on wanting oil for decades and governments won’t do enough to make the switch. Exxon expects demand for fossil fuels to grow by about 25 per cent in the next 25 years, and oil will continue to be part of the mix.

But according to Politico (subscription required) the American oil industry is finally renewing its position on climate change, including how it puts its message to the public on the issue.

The industry’s main lobbying group, the American Petroleum Institute, is creating a task force to examine policy and messaging.

One source told Politico: “The political environment has shifted so dramatically with Paris, with the ‘keep it in the ground’ campaign having controlled the conversation, with a president making climate change policy part of his legacy. So it makes sense for API to be reviewing its approach to climate.”

Whereas many people will see this as akin to polishing the stable door long after the horse has bolted, if Exxon and the others don’t want to go the way of Peabody, it will be interesting to see what new approach they try and come up with over climate. But history tells us not to hold our breath for anything too progressive.

And whether these companies will fight off bankruptcy in the years and decades to come remains to be seen. And whether they listen to Lord Browne is anyone’s guess too.