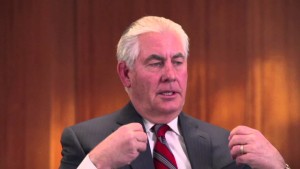 The boss of oil giant Exxon, Rex Tillerson, will be an “oil man” until the day he dies. And on yesterday’s performance at the company’s AGM this old oil dinosaur is not going green anytime soon.

Rex is a Texan, who has spent much of his career before he became the boss of Exxon working in the upstream of the company, exploring for oil across the far flung places of the world.

Writing in the book “Private Empire, ” Steve Coll records how when Tillerson was being groomed for the top job to replace Lee “Iron Ass” Raymond, he was seen as an ideal candidate because “real men – they discover oil”.

And despite probably the most contentious AGM in the company’s history (apart from maybe the Exxon Valdez fall-out), the “real men – they discover oil” mentality was still very much in evidence with Tillerson and Exxon’s board.

Exxon was under internse pressure to react to climate change and the on-going investigations into how it mislead shareholders and the public on global warming. Outside the AGM, protestors held banners saying “Arrest Exxon” and “Keep in in the Ground”, whilst chanting “Exxon lies, oceans rise!”. A huge block of ice with the hashtag #ExxonKnew melted nearby.

Inside, the board faced a barrage of questions and resolutions.

One of the questions was from the family of an Exxon scientist who first told senior management about climate change in the 1970s. In 1978 he wrote a memo about the risks of carrying on burning oil and gas: “Present thinking holds that man has a time window of five to ten years before the need for hard decisions regarding changes in energy strategies might become critical.”

Writing in the Guardian the scientist’s daughter, Claudia Black-Kalinsky, wrote: “We’ll never really know what would have happened if Exxon had listened to my father. But at today’s shareholders meeting, Rex Tillerson can still do the right thing” and end donations to organisations “that undermine the public’s understanding of science. And instead of confusing the public on climate change, Tillerson should channel the company’s incredible resources – including its scientists and lobbying muscle – to solving it.”

Despite intense shareholder pressure, Tillerson argued that cutting oil production was “not acceptable for humanity” before adding “The world is going to have to continue using fossil fuels, whether they like it or not.”

In Tillerson’s presentation, the oil man argued that Exxon’s forecasts that oil and gas will still provide about 60% of the world’s energy demands in 2040, no matter the climate commitments that countries have signed up to.

The company’s shareholders disagreed. Just under 40 per cent voted for a proposal which would force the company to publish an annual study of how its profits may be affected by public climate change policies to limit the global temperature increases rise to under 2C.

More than 60 institutional investors with over $10 trillion in combined assets supported the measure, but the board rejected it.

The head of responsible investment at the Church of England, Edward Mason, who proposed the resolution and manages billions of dollars of assets, called it a “very significant shareholder revolt on climate change”.

“A significant number of Exxon shareholders want the company to step up when it comes to climate change,” added Pete Grannis, First Deputy Comptroller for the New York State Comptroller. “Exxon has a responsibility to its investors to explain how it can adjust its business to meet the global effort to reduce fossil fuel consumption. Investors need to know that Exxon is taking steps to protect its long-term value.”

Ironically Exxon had tried to block the resolution even being heard.

The Exxon board also barred the Guardian newspaper for its “lack of objectivity” on the subject of climate change, which is ironic beyond belief.

But the board could not defeat a “proxy access” measure which would let minority shareholders nominate outsiders for seats on the board. This means in theory a climate activist could eventually become a director on Exxon. It was the first shareholder resolution passed for a decade.

In response to the shareholder meeting, David Turnbull, Campaigns Director of Oil Change International said it had been “a stark example of Exxon’s continued intransigence when it comes to climate change. Time and time again, shareholders demanded they take action to address the impact the company has on the global climate. And time and time again, Exxon’s leadership actively worked to reject such proposals.

He added: “Today’s meeting clearly shows that Exxon continues to deny its role in our climate crisis even amidst strong pressure from its shareholders, and will do everything it can to continue their disastrous status quo that imperils our climate and will ultimately destroy their own business.”

Tillerson, who earned $23.4m last year, is due to retire before his 65th birthday, in March next year.

Maybe before his retires, he will realise that real men discover renewables not oil.