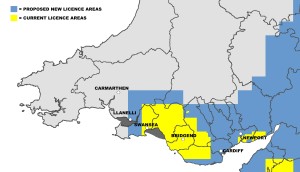 There are many ways you can question the logic of the British Government’s pro-fracking push.

Before we mention ongoing issues of water contamination; air pollution; earthquakes; problems with household insurance; the effect on house prices; massive public opposition to the technology and climate change, there is the slight disconnect with the oil price.

As the international oil and gas industry implodes off the back of the oil price and cuts exploration and production projects worldwide, the British Government is belligerently backing fracking.

The Government seems blinkered to the fact that the low oil and gas price makes widespread fracking even more unlikely across the UK.

Indeed, news from Wales is that the company which owned fifty per cent rights to frack in the south of the country, Eden Energy, has sold its share for the paltry sum of £1, plus a royalty if oil or gas is ever produced.

This is a huge setback for the industry and experts are now saying that fracking is unlikely to happen in Wales for at least a decade.

Leading academics are now arguing that the oil price needs to “quadruple” before fracking becomes economic in the UK. Professor Calvin Jones of Cardiff Business School told the Wales online website that:

“The economics of fracking are such that you would need to see oil probably quadruple in price from where it is now to see any incentive to frack in the UK commercially given the geological difficulties.”

There is also growing political momentum against fracking in the country too: The Welsh Government has issued a direction “imposing a moratorium on local planning authorities approving planning applications for fracking.”

And this week, local councillors in Swansea voted unanimously to oppose fracking too. A report by council officers stated:

“There is a growing public concern that unconventional gas extraction entails significant risks to the environment and to the health and wellbeing of neighbouring communities.These include, but are not limited to, potential air pollution, pollution of water resources and increased industrialisation of the countryside.

It added: “There is also concern that exploration and extraction of fossil fuels by unconventional means undermines and diverts resources away from investment in a safe and secure renewable energy future.”