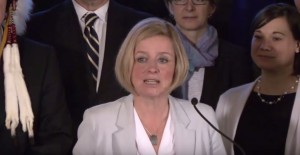 And so the climate movement marches on. The last couple of months have been pretty amazing for those working towards a healthy climate future.

The controversial Keystone XL pipeline is dead; Exxon is being investigated for lying about climate change; Shell and Statoil have pulled out of the Alaska Arctic, and Obama has cancelled further Arctic leases.

And now we have good news from Canada from the belly of the tar sands beast.

Yesterday, the new Premier of Alberta, Rachel Notley, announced a climate plan that will phase out coal for electricity by 2030, ramp up solar and wind to 30% by 2030, set a price on carbon of $30/ton as well as putting a cap on tar sands emissions of 100 million tonnes, compared to about 70 million today.

“This is the day we stop denying there is an issue,” Notley said at Edmonton’s Science Centre, “Climate change is real, it is caused by human activity and it requires an effective response.”

“Our goal is to become one of the world’s most progressive and forward-looking energy producers,” Notley added. “We are turning the page on the mistaken policies of the past, policies that have failed to provide the leadership our province needed.”

Long-term critics of the industry see the plan as historic, and a complete turnaround in Canada’s most carbon-intensive province. “I can’t believe this is happening”, tweeted Tzeporah Berman, an Adjunct Professor in Environmental Studies at York University, who was in the audience yesterday.

“Congratulations @RachelNotley for an impressive climate plan,” Berman added. “Alberta and Canada should be proud today. Everything changes now. Today we begin creating clean economy for our children. “

Speaking at the announcement, Executive Director of the Pembina Institute, Ed Whittingham said “Today Alberta takes its rightful place as a leader on the world stage. Your made in Alberta climate leadership plan positions our province to be a global leader on climate change.”

Greenpeace also hailed Notley’s new plan: “This announcement is a major victory for people and communities that have long raised concerns about growing tar sands emissions” said Greenpeace campaigner Mike Hudema. “With the announced cap the government has finally set a limit on tar sands extraction. The days of the infinite growth of the tar sands are over and investors should take note.”

Praise also poured in from the US: Stephen Kretzmann, ED of Oil Change International said: “The sun is setting on the tar sands industry. It is now possible to see a new day for Alberta where high cost, high carbon, high risk tar sands are phased out in favor of clean, safe, and renewable energy. The idea that tar sands growth is inevitable has left the building. Good riddance.”

The Sierra Club were also positive noting that “the world is seeing that bold and decisive leadership to tackle the climates crisis and grow the clean energy economy can emerge from the home of the dirty and dangerous tar sands industry.”

Beyond the initial enthusiasm, we should also remember though that this is only the first step in tackling the tar sands, it is not the total end of the tar sands. The industry will still try and develop new mines and pipelines. It is just that job got a whole lot harder. And some tar sands mines now will never be built.

In the meantime the climate movement sails onto Paris with wind in its sails.