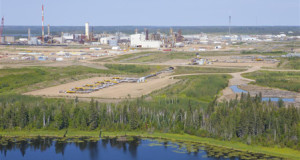 Timing, they say is, everything. The heads of Canada’s provinces are currently meeting at their annual summer gathering to discuss the so-called “Canadian Energy Strategy,” which will dictate the country’s energy strategy for years to come.

To coincide with the meeting, a dozen environmental groups across the country have publicly called for a strategy that would stop tar sands development and related infrastructure, such as oil train facilities, tankers and pipelines. Instead they want a commitment to build a clean energy infrastructure.

But this is unlikely to happen: As my colleague Hannah McKinnon pointed out yesterday, one thing the Premiers seem to agree on is the need for more pipelines to accommodate expansion of the tar sands.

So we go back to timing. As if to re-iterate the continued risks of tar sands expansion, on Wednesday there was one of the largest leaks in Albertan history.

An estimated five million litres of emulsion – a mixture of bitumen, water and sand – was spilt from a Nexen Energy pipeline some three dozen kilometres southeast of the tar sands capital, Fort McMurray. The spill reportedly contaminated an area of some 16,000 square metres.

Nexen, which is a wholly-owned subsidiary of China’s CNOOC brags on its website how it is “responsibly” developing the tar sands.  After the spill, the company enacted its emergency response plan and by yesterday at least, the leak had been stabilised. It is unknown how long it will take to clean up the leak.

A spokesperson for the Albertan regulator, Peter Murchland, said: “My understanding is that the pipeline and pad site had been isolated and shut-in earlier today, effectively stopping the source of the release.”

Not only did the spill happen just as Canada’s Premiers were meeting, but also as the tar sands industry struggles to build a whole series of new pipelines to get the tar sands to the market, including the controversial Keystone XL and Energy East.

Greenpeace was unimpressed, calling the leak a “good reminder that Alberta has a long way to go to address its pipeline problems, and that communities have good reasons to fear having more built.”

And, whilst oil spills are a current reminder of the day to day risk of tar sands expansion, we cannot forget about climate change. As Hannah McKinnon pointed out yesterday, there is a distinct lack of leadership on the issue from the Canadians:

“No one can credibly claim that ramping up tar sands production and building the infrastructure (aka pipelines) required to do so fits in a strong climate plan,” she wrote, adding: “Where is the leadership? Where is the vision? Canada could be so much more than a global climate pariah with a tar sands fetish.”