Canadian premiers are meeting this week to discuss the so-called Canadian Energy Strategy – an effort by Canadian provinces and territories to come up with a united front on energy in Canada.

Increasingly, premiers have assured the country that any energy strategy must go hand-in-hand with ambitious efforts to deal with greenhouse gas (GHG) pollution and climate change.

On this count, premiers look set for a spectacular failure and yet another missed opportunity to connect the dots, deal with their collective and clear cognitive dissonance, and make Canadian energy about much more than pipelines and oil.

In a version of the strategy leaked a few days ago, one thing premiers appeared to agree on is the need for more pipelines to accommodate expansion of the tar sands. They couldn’t agree, however, on the need for absolute, meaningful GHG reduction targets.

Perhaps because the two can’t co-exist. 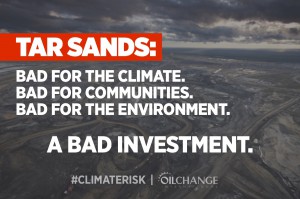 We already have access to significantly more fossil fuels than we can afford to burn – expanding to produce more is outright reckless unless you couldn’t care less about the global climate.

You cannot race to the microphone and trumpet your climate progress (as many did during the Ontario-hosted climate summit just a few days ago), and then turn around and pave the path for pipelines and tar sands expansion. It is effective denial of the best available science, which says that the vast majority of remaining tar sands simply cannot be burned.

Most recently, 100 prominent North American scientists called for a moratorium on expansion, and academic research published in Nature confirmed that 85% of the resource couldn’t be safely exploited. Add to this the devastation felt by all of the impacted communities in the area when it comes to health, safety, rights, and traditional livelihoods.

On top of the clear urgency of reducing GHG emissions, you would wonder if Canada’s premiers skipped the briefing on the economic risks tied to expanding a high-cost, high-carbon, high-risk oil project in an era of climate change, price volatility, and unburnable carbon.

The tar sands are not only among the most carbon intensive oils on the planet, but they are also one of the most expensive to produce – making investment in them a multi-billion dollar bet that we will fail to tackle climate change.The likes of the International Energy Agency show that the levels of future oil demand that would make tar sands profitable would also result in catastrophic levels of global warming.

There has been a lot of hope in Canadian politics lately – a seismic shift in Alberta and lots of talk around pricing carbon and investing in renewables across the board – but the buck stops here.

No one can credibly claim that ramping up tar sands production and building the infrastructure (aka pipelines) required to do so fits in a strong climate plan.

Where is the leadership? Where is the vision? Canada could be so much more than a global climate pariah with a tar sands fetish. We are not talking about shutting the industry down tomorrow; we are talking about putting a stop to expansion, and taking the time for a just transition towards energy, jobs, and economic stability that won’t take the climate down with it.

For a brief window, it genuinely felt like Canadian premiers might be ready not just to turn over a new leaf, but to show bold vision and foresight that could be a turning point in shepherding Canada into a new era where energy equals so much more than oil.

It is a great pity and incredible disappointment that this doesn’t seem to be the case – but it will only serve to make the movement of concerned citizens stronger.