There are usually clear signals if you find yourself driving towards a cliff. Presumably the smooth paved road you were driving on ends and turns into a less-travelled gravel road, from there, chances are dirt starts to take over where gravel is no longer hauled in. As you get closer to the cliff, lets be honest, the road probably turns and for those that head off-road despite the obvious signs – they must have a death wish, or alternatively, they are just ignoring reality.

In this analogy, Big Oil (and the fossil fuel industry in general) is the driving force: pushing us towards the cliff. You can ima

gine leaders and politicians at the steering wheel, but refusing so far to put much pressure on the brakes or veer in some other direction with any sense of urgency.

But something else is happening in this story – there are more and more obstacles appearing. Things popping up that inevitably force a bit of slowdown, or at least a second glance. This is where the people power comes in. From sticking up warning signs, to throwing obstacles in the way, all in the hope that the drivers will come to their senses before it is too late, or that they are simply forced to stop because the hurdles have become too great.

A few of these hurdles came into clear view this week, perhaps with a particular focus on one of the world’s largest oil companies: Royal Dutch Shell. This week alone it has been faced with three clear signs that things are only going to get harder for it unless it gives up on pushing us towards the cliff.

Firstly, its Arctic drilling plans were exposed to be in clear violation of federal rules regarding the distance between drilling wells (the rules say 15 miles, Shell is planning on 9), which should throw yet another hurdle in the way of its dangerous Arctic drilling program. This violation comes on the heels of an uprising of opposition against high risk, high carbon, and high cost Arctic drilling in an era where we can’t even burn most of the carbon we already have access to.

Secondly, the Dutch Government ruled that production from one of Europe’s largest gas fields and a major Shell project (in its home country) must be slashed given clear evidence that extraction has caused hundreds of earthquakes (119 in 2013 alone). Shell (and its partner in crime Exxon) will be forced to scale back significantly in the region of Groningen amidst hundreds of ongoing compensation cases for people whose homes and livelihoods have been destroyed by the earthquakes over the past quarter century (the link between fracking and earthquakes is one that is still tragically ignored or denied throughout the United States.)

And thirdly, also on the home front, in an historic ruling yesterday, Dutch courts ruled that the government must adopt more ambitious emissions reductions targets (and meet them). Some 900 Dutch citizens, citing government responsibility to act and protect the country from climate change, filed the court case in 2013.

This precedent setting victory – demanding that the Dutch government increase its emissions reductions target from 17% (below 1990 levels by 2020) to 25% – opens the door for similar cases worldwide.

These are people powered obstacles. In the case of the Arctic, it was civil society NGOs that combed through the pape 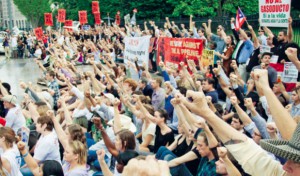 rwork, found this critical violation and brought it to national attention. In Gronigen, it was people on the front lines of the devastating impacts of fossil fuel extraction that refused to back down and demanded that more was done to protect their homes, families and livelihoods. And in the Netherlands court case, it was these 900 citizens that knew that what their government was offering wasn’t enough and found a way to force more ambition in a country that can do better.

The thing is, people don’t want to go over the cliff, and the world is getting increasingly frustrated that leaders are failing to change course even as the dirt road ends. So this is people power taking things into its own hands, building obstacles, constructing walls, adding day-by-day to the gradient that will make the coming years a truly uphill battle for those refusing to come to terms with reality.

Yes – changing directions would be the easiest way out of this, and there are growing incentives for those behind the wheel to turn – but until they do, the status quo will only get harder and harder.