Yesterday at the Royal Dutch Shell AGM in The Hague, the company’s leadership was grilled with questions and concerns about its high-risk plans for offshore U.S. Arctic oil exploration, and how it will square that circle with its apparent commitment to take climate change more seriously.

Interventions ranged from powerful statements and concerns from indigenous leaders on the front lines in Alaska, to hard-hitting questions from institutional shareholders about the very real financial risks of the high cost Arctic program. 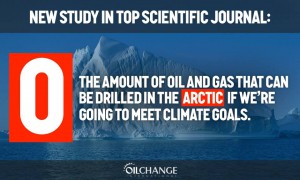 It was one of these many questions that prompted a curious response from Shell’s CEO, Ben van Beurden. Why was everyone picking on Arctic oil? In his view, connecting Arctic oil to climate change is, “illogical”. Oil is oil. It was an interesting response that seemed to offer a lot of insight into Shell’s disconnect from the biting reality: the fundamental point that we are going to have to leave fossil fuels in the ground if we are serious about addressing climate change.

The economics are clear; the only way Shell can ever make money with Arctic oil is if climate change remains unaddressed. Shell’s Arctic program is a multi-billion dollar bet that we will fail to avoid dangerous climate change and that is why the company is feeling the heat from a growing coalition of investors, stakeholders and ordinary citizens.

We already have more than enough fossil fuels in proven reserves to exhaust our global carbon budget. In fact, well over 75% of the oil, coal and gas we already have access to will have to remain in the ground in order to have a decent chance at avoiding the worst impacts of climate change.

This means we face some serious questions about how we are going to divide up the remainder of the burnable carbon. There are many factors that will play into this: cost, carbon intensity, equity, geopolitics… but it isn’t hard to understand why high cost, high risk oil that is at a minimum a decade away from production doesn’t make the cut.

It seems there are two possible explanations for the CEO’s concerns about the logic of it all. The more charitable interpretation is that Mr. van Beurden is suffering from a dangerous case of fossil fuel fatalism. The delusional sense that continued and rapid growth of fossil fuel use is inevitable, and that prosperity in the coming decades rests on the back of increased exploration, expansion and exploitation of fossil fuels.

The other explanation is that Mr. van Beurden – a chemical engineer by training – understands very well that you can’t put more into the atmosphere than the atmosphere can safely hold, but that his company will fight tooth and nail for a disproportionate share of the remaining carbon budget.

Either way – the end result is the ongoing and aggressive efforts by Big Oil to convince us that our fossil fuel addiction can’t be overcome, at least not until they have squeezed every last penny possible out of high-carbon fuels.

You can read more here, here or here about the economic case that drives the Arctic-climate conundrum that has Mr. van Beurden so outwardly perplexed. Whether he really misunderstands the problem or pretends to, it’s clear that many people do indeed suffer from fossil fuel fatalism. Not least the politicians and diplomats who find it so hard to show leadership on climate change.

And meanwhile, the burden also rests on all of us to free ourselves from our own fossil fuel fatalism. Yes the stuff has powered the past, but that is not a convincing reason for it to power the future. In fact there are many more convincing reasons that it won’t. We just need to stop letting the fossil fuel industry define the limits of what is possible. That era is ending with the growing movement to leave it in the ground.