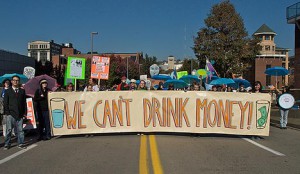 Yesterday I blogged about how a new report by the UK-based CHEM Trust warned of “significant” harm to humans and wildlife from fracking chemicals.

There was a predictable backlash on Twitter to the report being published, including one person who argued that the report was “more scaremongering.” They tweeted that “There had been millions of wells fracked” and were any humans dead, they asked?

Needless to say anyone with a basic understanding of science will know that to prove a causal link between a product and harm is notoriously and painstakingly difficult. The history of tobacco and health teaches us that.

In the UK, for example, some sixty years after the first causal link was made between smoking and cancer, some may find it incredulous that no one has successfully managed to sue a tobacco company for the damage their lethal product has caused.

What we do know, and as I have pointed out on this blog before, is that science takes time to catch up with events. In the US we have seen a fracking explosion and now the science is slowly revealing the harm caused by the controversial technique. Month after month we get new evidence that there is cause for concern.

Last week, for example, a new peer-reviewed study was published by the University of Texas at Arlington in the journal of the American Chemical Society, called Environmental Science & Technology. One of the greatest areas of concern around fracking is the failure of the well casing under the extreme pressures that fracking operates under.

The scientists pointed out that, although research suggests that well case failure occurs in three per cent of operations, “recent findings indicate failure rates closer to 12% within the first year of operation”.

Well case failure would be one of the main ways in which frack wells contaminate drinking water. The scientists analysed 550 groundwater samples collected from private and public water wells from aquifers overlying the Barnett shale formation, where some 20,000 fracking wells have been drilled.

And what they found again rings alarm bells. The team detected at least one of the so-called BTEX compounds (benzene, toluene, ethylbenzene and xylene) in over two-thirds of the wells: 381 of the 550 collected samples. Some 10 wells had detectable amounts of all four BTEX compounds.

In total they found elevated levels of 10 different metals and presence of 19 different chemical compounds, including the BTEX compounds, which have been associated with numerous health impacts, including problems with the respiratory and nervous system and cancer.

For example, as the CHEM Trust report outlines, benzene is a carcinogen associated with leukaemia in humans and xylene is toxic and may be reprotoxic.

The scientists were quick to point out that they could not prove that the chemicals came from fracking, but they noted that “many of the compounds we detected are known to be associated with [fracking] techniques.” They argued that further reseeach was needed.

The leader of the research, Kevin Schug, a Professor of Analytical Chemistry, said that his team’s work was “the most comprehensive groundwater study in connection to this whole process.”

He added: “I hope our data can serve as a springboard for studies that use detailed chemical signatures to pinpoint the impact of various aspects of unconventional drilling processes on groundwater quality.”