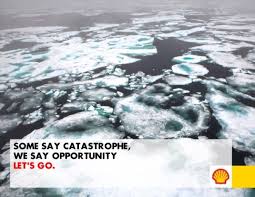 The oil giant is proposing to drill up to six wells in the fragile and ecologically sensitive waters of the Chukchi Sea, which is a vital migration route for bowhead whales and walruses, amongst others.

In a statement issued on Monday, the Bureau of Ocean Energy Management (BOEM) conditionally approved Shell’s multi-year Exploration Plan for the region.

It comes three years after Shell was forced to abandon its drilling activities after a series of blunders which verged on the farcical. This culminated in the company’s drilling rig, the Kulluk, running aground as it was being towed back to port.

In making the announcement, BOEM Director, Abigail Ross Hopper said: “We have taken a thoughtful approach to carefully considering potential exploration in the Chukchi Sea, recognizing the significant environmental, social and ecological resources in the region and establishing high standards for the protection of this critical ecosystem, our Arctic communities, and the subsistence needs and cultural traditions of Alaska Natives.”

Hopper’s statement could immediately be dismissed as nonsensical  – if BOEM did actually recognise the environmental and ecological risks then no drilling would be allowed. Two immediate obvious fundamental flaws are:

Numerous environmental groups were quick to criticise the announcement. David Turnbull, Campaigns Director of Oil Change International argued the decision was “yet another example of the dangerous disconnect between our climate imperatives and the Obama administration’s energy policy, and amounts to nothing short of climate denial.”

Turnbull reiterated the point that Arctic oil is “one hundred percent unburnable carbon.”

Similar sentiments were expressed by Tim Donaghy, a senior research specialist at Greenpeace, who said. “Shell has a history of dangerous malfunctioning in the Arctic while global scientists agree that Arctic oil must stay in the ground if we’re to avoid catastrophic climate change.”

Donaghy warned that Shell’s activities “could lead to a disaster in the Arctic”.

Susan Murray, vice-president of environmental group Oceana, criticised the plan as being “risky and ill-conceived”, which would “put our ocean resources at risk.”

Finally Erik Grafe, an attorney for Earthjustice, added: “This decision places big oil before people, putting the Arctic’s iconic wildlife and the health of our planet on the line.

He added: “Ultimately, Arctic Ocean drilling is far too risky and undermines the administration’s efforts to address climate change and transition to a clean energy future.”

With such high stakes, one thing is for sure, the battle for the Arctic is going to be one of the defining issues of our generation.