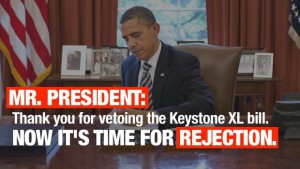 In the end the President made good on his promise.

Yesterday, in a moment described as void of “drama or fanfare,” he vetoed legislation which would have forced approval of the controversial Keystone XL pipeline, which would carry dirty tar sands oil Alberta to the Gulf Coast.

For only the third time in his Presidency, Obama opened a left handed “veto pen” and blocked legislation, in a move that escalates the battle over the pipeline between the President on the one hand and the Republicans and Canadians, which has now been going on since 2008.

It is important to realize that Obama only vetoed the legislation, arguing that the recent Republican bill which approved the pipeline was trying to usurp his ultimate authority over whether the pipeline will be built or not, although the statement did also ongoing environmental analysis of the proposal.

In a short, 104 word, statement the White House said: “Through this bill, the United States Congress attempts to circumvent longstanding and proven processes for determining whether or not building and operating a cross-border pipeline serves the national interest.”

Despite the veto of the legislation, Obama has not, as yet, permanently rejected the pipeline’s permit itself. The President has always said he would wait until a State Department review was finalised before making any final decision.

The reaction from the Republicans was petty and predictable. Republican Majority Leader Mitch McConnell (R., Ky.) immediately responded that they would try and override the veto by next week, although the pro-pipeline forces do not currently have the two-thirds majority necessary for an override.

Likewise, Republican House speaker John Boehner was incandescent. “The president’s veto of the Keystone jobs bill is a national embarrassment,” he said. “The president is just too close to environmental extremists to stand up for America’s workers”.

The Canadian response was also predictable: “While today’s decision was expected, it does not change the fact that Keystone XL would advance North American energy security and prosperity while offering the U.S. access to responsibly developed energy from a close ally and friend”, said Alberta Premier Jim Prentice.

Greg Rickford, Canada’s Minister of Natural Resources, was still adamant that the pipeline would get built, whatever the President decided. “It is not a question of if this project will be approved; it is a matter of when.”

Opponents of the pipeline strongly disagree and believe that Obama’s move is a step to a full rejection. “Republicans in Congress continued to waste everyone’s time with a bill destined to go nowhere, just to satisfy the agenda of their big oil allies,” said Michael Brune, the executive director of the Sierra Club. “The president has all the evidence he needs to reject Keystone XL now, and we are confident that he will.”

Steve Kretzmann, the Executive Director of Oil Change International, commented “Because the President has been clear that if the pipeline caused a significant increase in carbon emissions, it would not be found in the national interest, we look forward to his final rejection of this dirty and dangerous pipeline.”

“The fight is not over”, Tom Goldtooth, Executive Director of the Indigenous Environmental Network, added. “We need an outright rejection of the KXL permit. That would be the final nail in the coffin for Keystone XL. We stand united with Indigenous peoples … who are fighting against tar sands development and infrastructure, from northern Alberta to the Great Plains to the Gulf. We will see this fight through to the end.”