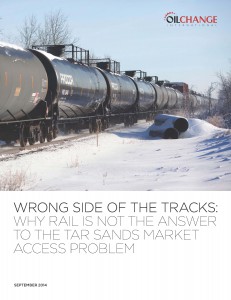 When the State Department issued its final environmental impact report on the Keystone XL pipeline back in February of this year, one of the key elements driving its conclusion that “the proposed Project is unlikely to significantly affect the rate of extraction in oil sands areas” was the idea that the North American rail system would pick up the slack.

Oil Change International released a report today that firmly concludes that it can’t and it won’t.

We found that for much of 2014, shipping tar sands by rail to the Gulf Coast (the intended destination of Keystone XL) has been losing money and the economics are unlikely to change any time soon.

Some rail shipments continue to make the 3,000 mile journey due to contractual obligations but these shipments averaged less than 6 percent of the capacity of Keystone XL in the first five months of 2014, a mere 47,000 barrels per day. Total tar sands rail imports into the U.S. are around 3 percent of the projected transportation need to 2030. And this is during a period in which the capacity to load and unload bitumen from trains grew significantly.

The idea that rail can profitably deliver the roughly 4 million bpd capacity of currently proposed pipelines is so far-fetched, that even those moving bitumen by rail do not believe it. When Steve Hanlon, President and CEO of Gibson Energy Inc., said “Crude by rail is not a panacea. It’s not going to replace pipe.” he was right. And he should know, his company operates several crude-by-rail terminals including one that loads tar sands bitumen onto trains in Alberta.

Just a glance at the chart below is enough to recognize that the gap between today’s transportation capacity and forecast Canadian oil production is unbridgeable by rail. Considering that tar sands producers want to recklessly grow production beyond this forecast it is abundantly clear that every pipeline counts toward the goal of either achieving or thwarting that growth. 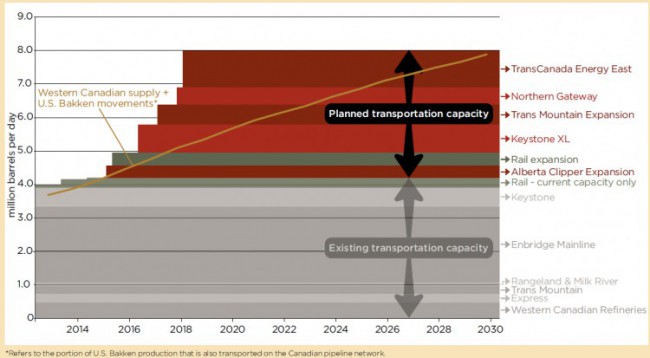 So what’s the problem? Surely all the tar sands producers need to do is buy more tank cars and install more loading capacity and they can run trains full of tar sands to every refinery and port in the union.

The problem is cost. The tar sands industry is already sailing close to the wind with some of the highest costs in the oil industry while producing the lowest quality crude oil that sells at substantial discounts to other crude oils. This combination of high costs and poor returns is working against bitumen-by-rail being much more than a niche activity.

The headwinds facing the bitumen-by-rail trade can be summarized as follows:

The reduced profitability of shipping bitumen by rail means that tar sands producers are less able to grow their production capacity because they cannot profitably deliver bitumen to distant markets.

While the transport of tar sands bitumen by rail may grow to accommodate near-term production growth plans, perhaps tripling from today’s level in the next two years, it is abundantly clear that it cannot replace 4 million bpd of pipeline capacity.

The debate around pipeline versus rail is a red herring. The real choice that we are faced with is between climate damage resulting from the status quo and a modern, low-carbon energy future that can ensure a safe climate and environment for generations to come. One of the first steps towards that future is to stop extracting more tar sands crude that climate science clearly indicates we cannot afford to burn.