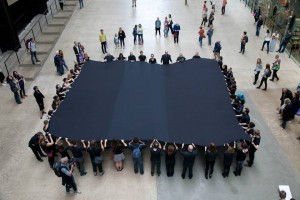 Yesterday over a hundred members and supporters of the UK-based art collective Liberate Tate carried out their latest art protest against the oil giant BP in the Tate Modern’s iconic Turbine Hall in London.

The protest comes just days after BP was labelled “grossly negligent” for its actions in the run up to the 2010 Deepwater disaster, which killed eleven and caused millions of gallons of oil to be spilled.

The protest was an unsolicited interpretation of Russian abstract painter Kazimir Malevich’s iconic Black Square which is currently on display as part of the Malevich exhibition at Tate Modern.

It also included ‘Hidden Figures’ in a reference to the Tate’s recent refusal to disclose information to the protestors about the Tate’s controversial sponsorship relationship with BP.

Yasmin De Silva of Liberate Tate said: “There’s an important debate taking place about whether we let oil companies get away with pretending to be good corporate citizens by sponsoring cultural institutions”. She added that BP needed to be “more transparent about its operations and to respond to public pressure over BP sponsorship.”

It’s not hard to see why BP spends millions greenwashing its image, by funding organisations such as the Tate. Indeed, the protest came three days after a US judge issued an historic judgement on Thursday against BP by labelling the oil giant “grossly negligent” in the lead-up to the 2010 spill in the Gulf of Mexico.

The ruling, which is seen as body blow for BP, could cost quadruple the civil penalties the company must pay to $18 billion. It is not surprising that it sent the company’s shares plummeting by 6 per cent.

The New Orleans judge Carl Barbier, who has overseen a lengthy civil trial against the company, argued that BP was responsible for 67 per cent of the blame for the US’s worst offshore disaster.

He ruled that BP would be “subject to enhanced civil penalties” due to its “gross negligence” and “willful misconduct”. The finding of gross negligence means that BP pays $4,300 per barrel under the Clean Water Act, rather than $1,100 per barrel if it had found to be negligent.

One journalist from the Telegraph who has read the lengthy 153-page judgement, said the judge “painted a picture of an organisation so greedy it sacrificed basic safety in order to fatten profits.” Rather than focus on safety, BP made “profit-driven decisions”.

Given BP’s reckless corporate behaviour is it pretty despicable that it is receiving backing from the British Government, which is acting as a “friend of court” to the oil company.

The government is urging the US Supreme Court to review the appeals court rulings against the oil giant.  The British Government is trying to argue that these court rulings raise “grave international comity concerns”.

It warned that the courts’ treatment of BP undermined confidence in America and the “trust necessary for international commerce”, which the filing put at $200 billion a year.

So for the British Government, concerns about trade trump those of health, safety and the environment as well as corporate responsibility.