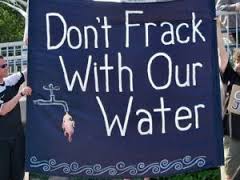 In the blinkered rush to frack the globe – first in the United States, secondly in Europe and thirdly in the rest of the world – the oil industry always underplays the risks of the technology.

But this brutal technique has a dangerous downside, ranging from air and water pollution, to the use of vast amounts of sands and chemicals. And then there is, of course, the huge volumes of water used in the fracking process.

The inescapable truth is that fracking uses a vast amount of water. Some estimates are that the technology uses up to 25 million litres of fresh water per well, which is a staggering amount of water.

Already in drought-stricken California we have seen huge tension between those wanting to protect the State’s fast dwindling water reserves and the fracking industry.

Back in February this year that Californian state assemblyman, Marc Levine, said simply: “The drought is a game changer on fracking. We have to decide what our most precious commodity is – water or oil? This is the year to make the case that it’s water.”

California’s conundrum is about to be played out on a global scale.

“Lack of water availability could curtail shale development in many places around the world,” the report warns. “As countries explore their shale exploration, limited availability of fresh water could become a stumbling block.”

For the 20 countries with the greatest shale gas and tight oil resources, WRI analyzed the level of water stress in each country. For shale gas, WRI concluded that 38 per cent of those countries – such as China, Algeria, Mexico, South Africa, Libya, Pakistan, Egypt, and India – face high water stress or arid conditions.

Furthermore 19% of shale reserves are in areas of high extremely high variability and 17% are in locations exposed to high or extremely high drought severity.

In China, which potentially has the world’s largest shale gas reserves, a massive 60 percent of those reserves are in areas with existing high water stress or arid conditions.

In the UK, where the government has recently opening up half the country to fracking, some 34 per cent of shale reserves are in areas that already face high water stress.

The potential for conflict between communities across the globe and the fracking industry is massive.

Nearly 400 million people live on land above shale reserves and it goes without saying that there will be a real fight –potentially one of the defining fights of our generation – between people trying to protect their water supplies and the fracking industry. In densely populated areas, such as the UK, this conflict is set to be even greater.

“Water risk is one of the most important but under-appreciated challenges when it comes to shale gas development,” argues Andrew Steer, the Chief executive of the WRI. “This analysis should serve as a wake-up call for countries seeking to develop shale gas.”