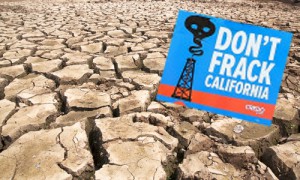 The conflict between California’s fracking industry and the State over protecting its precious water resources has been growing for months, made worst by California’s crippling ongoing drought.

It was back in February this year that Californian state assemblyman Marc Levine told Reuters that “The drought is a game changer on fracking. We have to decide what our most precious commodity is – water or oil? This is the year to make the case that it’s water.”

Since then, the drought has refused to release is vice-like grip on the State, with huge ramifications for domestic drinking supplies and agriculture.

Only last week, a report from the University of California revealed that the Sunshine State’s powerful agricultural sector is only weathering the worst drought in decades due to tapping into groundwater reserves.

It is worth remembering how important California is to the US for food and dairy products: producing nearly half of U.S.-grown fruits, nuts and vegetables and nearly a quarter of the nation’s milk and cream.

“California’s agricultural economy overall is doing remarkably well, thanks mostly to groundwater reserves,” said Jay Lund, a co-author of the study and director of the university’s Center for Watershed Sciences. But, he added, “we need to treat that groundwater well so it will be there for future droughts.”

But there is growing evidence that the State’s oil and gas industry is not treating the aquifers well at all. So much so, that State officials have ordered an emergency shut-down of eleven oil and gas waste injection sites as they are too close to aquifers used for drinking or agriculture.

They have also ordered a further review of more over 100 other wells in California’s drought-inflicted Central Valley.

Officials from the Division of Oil and Gas and Geothermal Resources are concerned that companies have been pumping potentially toxic fracking fluids into precious drinking water aquifers in the Valley.

An order, signed earlier this month, stated that the waste disposal “poses danger to life, health, property, and natural resources.”

For years the oil and gas industry has been allowed to dispose of waste in one hundred or so of the state’s aquifers, which were deemed to hold poor quality water or were seen to be too deep for water extraction. These aquifers were allowed to be deliberately polluted.

But Propublica reported last week that “it appears that at least seven injection wells are likely pumping waste into fresh water aquifers protected by the law, and not other aquifers sacrificed by the state long ago.”

Concern about contamination has been growing for a while. Back in the summer of 2011, the EPA found significant flaws in California’s injection well program and demanded improvements.

The tension between the fracking industry and water look set to continue. Although last Friday the emergency shutdown orders on two of the eleven injection wells were lifted, concerns about contamination of drinking water remain.

“Our drinking water sources must be protected and preserved for the precious resources they are, not sacrificed as a garbage dump for the oil and gas industry,” Damon Nagami, a senior attorney with the Natural Resources Defense Council, told ProPublica.