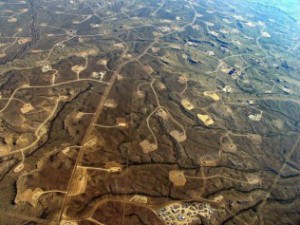 For years politicians in Britain have been looking with increasing envy at the burgeoning shale boom in the US, believing that it could be replicated in the UK.

To this end, the country’s government recently opened up about half of Britain to fracking.

In their rush to frack, the politicians are ignoring the growing scientific concerns about health and the environment that any regular reader of this blog will know about. For more on this see previous blogs on the site.

Looking through rose-tinted glasses at the fracking boom in the US is no doubt easy to do, it also hides a few home truths, which are becoming more and more apparent. Basically the industry is having to run to stand still: it has having to use more sand, more chemicals and more land in order to keep production static, let alone increase it.

Some of these issues are touched on in today’s Financial Times, in an in-depth piece by their energy reporter Ed Crooks.

Can you imagine a fracking company operating in Britain, like Cuadrilla or IGas going to a local council to ask permission to frack even a fraction of that amount of wells and not cause a complete meltdown in local democracy or widespread community outrage and protest? There are already community protests at every fracking well. And in the UK’s crowded and small island, you are never going to acheive this level of drilling density.

Another way the companies are extracting more shale oil is by what is term “downspacing”, which has been called the “next game changing technology in American energy”. Essentially all it is drilling more wells per square mile in the hope of recovering more oil. In the US, they are now drilling eight wells, where before there would have been four, with different wells drilling at different depths.

But downspacing will hardly be an option in Britain. There is only so much downspacing you will be able to do in Britain before you run out of land or have to literally drill is someone’s back garden.

Finally, as I have pointed out before, the industry is also pouring more and more sand down wells to try and increase oil recovery rates. One oil company, Conoco, has doubled the volume of ceramic proppant – a sand-like material – it uses for fracking since 2012. Now the FT points out, Conoco’s engineers are looking at ways to double the amount of proppant again.

Towards the end of last year, the UK’s Mineral Products Association (MPA), warned that Britain’s reserves of sand and gravel were in serious decline and were being used up more than twice as fast as new reserves are being permitted. This is before any fracking boom starts.

So either the UK will have to allow whole new areas of sand quarrying – again a highly contentious concept – or it will have to import tens of millions of tonnes of sand for the fracking industry, pumping up the cost or oil or gas. Both scenarios work against fracking being a simple solution to the UK’s energy needs.

So too does the inescapable lack of land to frack on.