That’s a huge amount of money. If you were so inclined, it could buy a mansion in Beverly Hills, dozens of sports cars, a private island, a penthouse in Manhattan, or sponsor 4-year educations at Harvard for nearly 100 students.

But unfortunately, according to our Dirty Energy Money database, that money actually represents the amount the oil industry has given to Senators who cosponsored a bill introduced today by Senators Landrieu (D-LA) and Hoeven (R-ND) pushing for approval of the disastrous Keystone XL pipeline. Cosponsored by the entire Republican Senate caucus and 11 Democratic Senators, it’s the latest in a series of efforts by the oil-soaked Congress to circumvent normal process for considering these pipelines and is expected to be voted on next week. 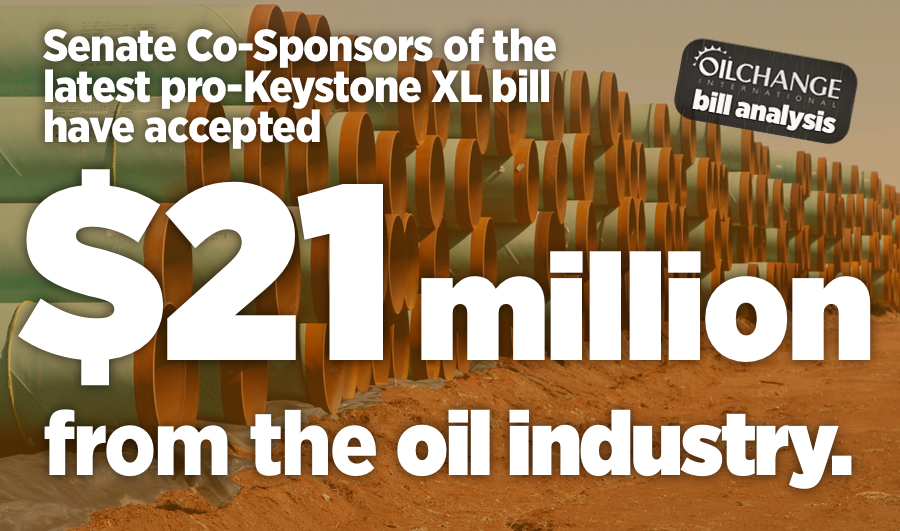 The Senate is swimming in dirty energy money, but the $21 million in Big Oil cash behind this bill is huge even in that context. On average, each Senator signed on as a cosponsor has received roughly $375,000 from the oil industry. Meanwhile Senators not listed as cosponsors average $78,000 in oil money per Senator.*

In other words, those Senators cosponsoring the pro-Keystone XL bill introduced today have received roughly 5 times more in oil industry cash than those who remained off the bill.

[No longer needed! The bill has failed as of May 12th]

*Note: Senator John Walsh of Montana was excluded from this analysis, as he was appointed to fill a vacant seat earlier this year and thus no campaign contribution data is available for him thus far.