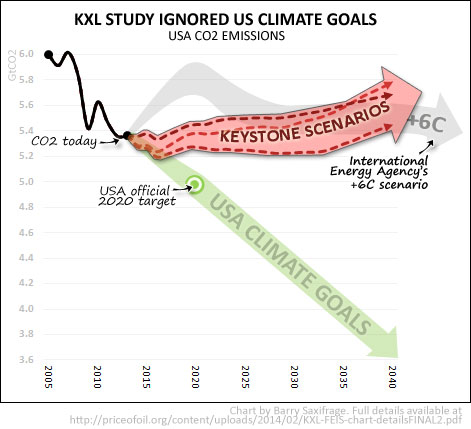 In 2009, President Obama made a commitment to reduce U.S. greenhouse gases by 17 percent by 2020.  The Obama administration put this forward as the U.S. share of a global effort to limit climate change to no more than two degrees Celsius – the target scientists tell us may be safe.  Achieving this target, which has been unanimously agreed on a global level, is central to the success of President Obama’s Climate Action Plan, announced in June of last year.

It is therefore shocking to realize that the State Department completely failed to take this target into account when evaluating the climate impacts of the Keystone XL pipeline.

The State Department’s Final Supplemental Environmental Impact Study (FSEIS) of the Keystone XL pipeline used three future U.S. energy scenarios developed by the Department of Energy.  None of these scenarios modeled a world in which the United States meets its stated goal of limiting climate change to less than two degrees Celsius (3.6 F), despite the fact that even these flawed models revealed that the carbon impact of the pipeline could equal as much as 5.7 million cars each year.

In fact, all of the scenarios used by the State Department result in emissions that put us on a path to 6 degrees C (11 F) of global warming according to the International Energy Agency  (IEA). IEA Chief Economist Fatih Birol described 6 degrees as nothing short of “a catastrophe for all of us.”

This failure to integrate the nation’s climate goals into environmental reviews seems to run deeper than the State Department.  The flaw, it seems, extends at least to the way that the Department of Energy’s Energy Information Administration (EIA) models its future energy scenarios, which hasn’t changed at all to take the President’s Climate Action Plan into account.

By avoiding any consideration of climate safety, the State Department report is blindingly clear on one point, if only by implication: the Keystone XL tar sands pipeline is not compatible with a climate safe world.

President Obama was absolutely right to decide to evaluate the Keystone XL pipeline on its climate impact.  In order to make that decision, and evaluate future infrastructure projects in an informed way, the President needs his Administration to evaluate projects on the basis of the nation’s climate goals.

At the very least, modeling what U.S. energy flows look like in a climate safe world should be one of the options presented to the Secretary of State and the President. Currently it is not.

While the State Department should have asked: “Will our efforts to meet climate objectives be hampered if we build Keystone XL?” the State Department’s report only manages: “In a future of inevitable catastrophic climate changes will Keystone XL make things significantly worse”?  That’s like asking on an already sinking Titanic if it would sink even faster with yet another hole in the hull.

The good news is that although we can all see the iceberg ahead, there is in fact enough time to turn with hopefully only a few scrapes. Just. Apparently the crew needs to start believing that turning the rudder hard will make a difference.

-Barry Saxifrage, Christopher Hatch, Lorne Stockman and Stephen Kretzmann all contributed to this piece.  For full details on the original analysis, go here.