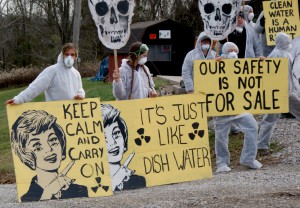 As the debate on fracking heats up in the UK, politicians are keen to point out that the process is safe.

The influential Conservative MP Peter Lilley appeared on TV the other night and arrogantly dismissed any concerns with fracking. “Any problems with the environment, safety and health can be satisfactorily managed”, he told the audience.

Lilley went on to say that “not a single person has been poisoned by contaminated groundwater.” For comments like this, he was called a “liar” by an anti-fracking campaigner in a live debate.

Lilley obviously has not heard of Duke University. As I have pointed out previously, research by scientists from Duke University has been published in the Proceedings of the National Academy of Sciences.

The research examined 141 drinking wells located within 1 kilometre of fracking wells in northeastern Pennsylvania. They found that in homes less than one kilometre from wells, methane was detected in 82% of drinking water samples, with average concentrations six times higher than normal.

Elsewhere in Pennsylvania, fracking has caused “significant damage” to drinking water aquifers in one town, Dimock.

Last October, scientists from Duke University also published a peer-reviewed study which examined water discharged into a local creek from fracking wells in western Pennsylvania. They took samples upstream and downstream from the fracking treatment facility over a two-year period.

They found radioactive brine in the wastewater, with elevated levels of chloride, bromide, combined with strontium, radium, and hydrogen isotopic compositions. Radium levels in stream sediments were approximately 200 times greater than upstream and background sediments.

Professor Avner Vengosh, one of the authors of the study, said hundreds of disposal sites could be affected.  “There’s the danger of slow bio-accumulation of the radium. It will eventually end up in fish and that is a biological danger,” he told the Guardian.

But here is the rub: in the US where most of the fracked wells, the industry is exempt from the Clean Water Act, so is self-monitoring its own waste waters to avoid regulatory oversight.

So in short we do not know how big the problem of radioactive waste water is for the fracking industry. What we know is that there should be a red flag warning about the issue.

“In the UK, if shale gas is going to develop, it should not follow the American example and should impose environmental regulation to prevent this kind of radioactive buildup, ” warned Vengosh.

So has the UK learnt the lessons from the US? Once again it seems the regulators are slowly playing catch up. Yesterday a leading expert on radioactive waste says plans for fracking in the UK could be delayed because of problems with the disposal of contaminated radioactive water.

The UK’s Environment Agency said it would not grant a radioactive substances permit to the controversial drilling company Cuadrilla until it was sure the water will be disposed of safely.

However it has also transpired that until the regulations recently changed, Cuadrilla had been allowed to classify the waste water as industrial effluent and had therefore been allowed to legally discharge two million gallons of radioactive water into the local Manchester Ship Canal.

Cuadrilla is now said to be preparing new permits to meet the revised guidelines.

But will the new guidelines actually protect the environment and public health? That is a question that right now cannot be answered.