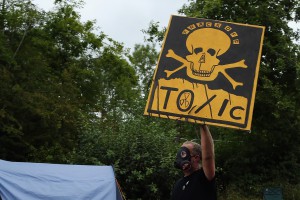 The British Prime Minister, David Cameron, yesterday dismissed critics of fracking as “irrational”, arguing that their opposition is based on a “religious” hostility to fossil fuels.

Cameron also said yesterday that large-scale fracking could lead to “clean, low-cost gas” for the UK for 30 years.  His comments came as his government was accused of offering “bribes” in order to try and persuade local authorities in Britain to approve fracking in their areas.

They will retain 100% of any business rates, whereas communities are to be offered up to £100,000 when a well is originally drilled, along with potentially millions of pounds in royalties. In these times of austerity, it is extremely unlikely that a community will resist such crude offers of ready cash.

There is nothing more patronising than a politician speaking on a subject he knows nothing about.  If anyone is showing a religious fervour in the fracking debate, it is the UK Conservative-led government.

They are blind to the ever-increasing risks of fracking. It is not that hard to spot the evidence either, suggesting that the British government is deliberately down-playing the risks.  It may be a strategy that comes back to haunt them.

Right now in North America there is a huge debate over the safety of moving shale oil by train, after a series of train explosions that have killed dozens of people and led to hundreds of thousands of gallons of oil being spilled.

This fracked oil is more flammable than normal traditional crude.  As I pointed out last week, in recent safety advice, the Pipeline and Hazardous Materials Safety Administration (PHMSA) advised that recent explosions “indicate that the type of crude oil being transported from the Bakken region may be more flammable than traditional heavy crude oil.”

But the most important thing that Cameron ignores is the growing scientific evidence against fracking suggesting widespread water contamination and pollution linked to, amongst other things, low birth weight. To give you some recent examples from just the last few months:

There has been growing compelling evidence of methane contamination of water supplies due to fracking for a number of years. For example, recent independent tests from Duke University from wells in Texas found combustible levels of methane in some of the wells.

Ironically when the Environmental Protection Agency had investigated the matter, they had declared that there were no dangerous levels of methane. The only slight flaw was that they had relied on tests conducted by the driller itself.

The results from Duke reveal that water from many local homes exceeds the level of 10 milligrams per liter that the U.S. Geological Survey has set as a minimum safety level.

Texas is not alone. Previous research by scientists from Duke University was published in the Proceedings of the National Academy of Sciences.

The scientists analysed 141 drinking wells located within 1 kilometre of fracking wells in northeastern Pennsylvania. They found that in homes less than one kilometre from wells, methane was detected in 82% of drinking water samples, with average concentrations six times higher than normal.

Also in Pennsylvania, according to a leaked powerpoint from the EPA, fracking has caused “significant damage” to drinking water aquifers in one town, Dimock.
.
Earlier this month, research was also presented at the annual meeting of the American Economic Association in the US, which examined the impact of fracking on birth weight in Pennsylvania, home to many fracking wells.

The researchers from Princeton University, Columbia University and the Massachusetts Institute of Technology, examined Pennsylvania birth records from 2004 to 2011 within a 2.5-kilometer radius of fracking wells. The scientists found the “proximity to fracking increased the likelihood of low birth weight by more than half, from about 5.6 percent to more than 9 percent.”

In December 2013, another scientific study published in the Proceedings of the National Academy of Sciences concluded that that US emissions of methane are probably 50 percent higher than current estimates by the US Government.

Once again this shows that “clean gas” from fracking is a myth.

David Cameron can argue that opponents of fracking are “irrational”. In doing so he ignores the growing hard science evidence of harm.

But when has the truth ever got in the way of a good political argument?