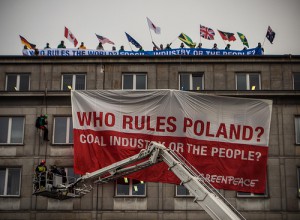 The Polish government has received widespread condemnation for co-hosting a Coal summit which started today in the midst of the UN climate change talks in Warsaw. It is being held at the Ministry of Economy and was opened by the Polish Deputy Prime Minister Janusz Piechoci?ski.

At the summit, the industry has tried to portray itself as central to the world’s energy needs for the foreseeable future, much to the consternation of scientists and environmentalists.

Christiana Figueres, the Executive Secretary of the United Nations Framework Convention on Climate Change, had also raised some eyebrows when she agreed to speak at the summit. She had faced calls from organisations such as Friends of the Earth, Greenpeace and Oxfam to withdraw.

But if the industry was pleased they had managed to persuade Figueres to attend, her speech to them was pretty blunt: “Leave most of the existing coal reserves in the ground”, she told them.

She warned of a “business continuation risk” and urged the coal industry “to honestly assess the financial risks of business as usual; anticipate increasing regulation, growing finance restrictions and diminishing public acceptance”.  By diversifying beyond coal, she told the delegates, you reduce the risk of “stranded assets”.

There was also more uncomfortable reading for the coal industry from 27 scientists who issued a joint statement rebutting the industry’s claims that “high efficiency” coal is somehow a low emissions technology.

The scientists were responding to a recent Communiqué from the World Coal Association (WCA) which had called for “the immediate use of high-efficiency low-emissions coal combustion technologies as an immediate step in lowering greenhouse gas emissions.”

The scientists argue that unabated coal is not a “low carbon” technology and that the use of unabated coal has to start declining now. In essenc, there is no such thing as clean coal.

One of the scientists, Dr Bert Metz, former Co-Chair of the IPCC’s Working Group on Climate Change Mitigation said: “New or retrofitted coal plants without CO2 capture and storage will have a life time of 40-50 years. We need to dramatically reduce emissions over the next 40 years. That is not possible with unabated coal.”

Environmental groups are also scathing about clean coal. “This whole concept of clean coal is a myth and it is being presented by the industry,” said Tasneem Essop, International Climate Policy Advocate for WWF.

Asad Rehman of Friends of the Earth adds: “Investing in new technology that will lock us into 30 or 40 years of more coal use does not make economic or environmental sense. It is better to use proven renewable technologies with zero CO2 output.”

Try telling the Polish government that.