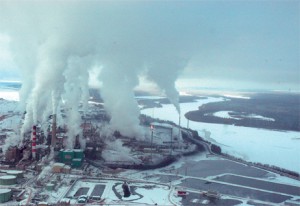 Canada’s monitoring of the dirty tar sands is clearly failing the local communities, despite attempts by the region’s politicians to spin it otherwise.

The seriousness of the situation was highlighted last week when scientific research was published that found levels of contaminants near the tar sands processing region were higher than in some of the world’s most polluted cities.

In the region men are now also suffering elevated rates of cancer.

The study by UC Irvine and University of Michigan scientists revealed that there were high levels of the carcinogens 1,3-butadiene and benzene as well as other airborne pollutants in communities on the front line of tar sands extraction and processing.

And amounts of some volatile organic compounds were a staggering 6,000 times higher than normal.

The researchers also found that the number of men with leukaemia and non-Hodgkin’s lymphoma was greater in communities closest to the pollution plumes.

UC Irvine chemist Isobel Simpson, lead author of the paper in Atmospheric Environment said:”Our study was designed to test what kinds of concentrations could be encountered on the ground during a random visit downwind of various facilities. We’re seeing elevated levels of carcinogens and other gases in the same area where we’re seeing excess cancers known to be caused by these chemicals.”

And co-author Stuart Batterman, a University of Michigan Professor of Environmental Health Sciences, added that the levels recorded “are evidence of major regulatory gaps in monitoring and controlling such emissions and in public health surveillance.”

On Monday this week, the Alberta government belatedly introduced legislation to create a new environmental monitoring agency focused on the tar sands. It could well be seen as a complicit admission that the old regulatory regime was fatally flawed.

But already critics are arguing that the law is not strong enough and leaves too many questions unanswered.

Nearly two years after Alberta said it would introduce a new system to monitor the tar sands, the Provincial government tabled legislation which will form the Alberta Environmental Monitoring, Evaluation and Reporting Agency (AEMERA). Its initial focus will be to collect data on water, air, land and biodiversity.

But the bill has already been criticised for being too light on details and does not require the Agency members to be scientists. One legislative member in Alberta, Rachel Notley also said: “The government should not be allowed to use the monitoring agency as a means of delaying action on preventing and eliminating pollution.”

Despite the fact that people are dying back home, Alberta’s Premier Alison Redford will try and spin the Province’s environmental record during yet another lobbying trip next month to Washington DC.

“We need to ensure American decision-makers have a clear understanding of the responsible energy development and the strong environmental policies we have in Alberta,” Redford said in a media statement.

How Redford can even try and claim that volatile organic compound levels some 6,000 times than normal are in anyway responsible is beyond me.

It just shows how removed from reality the Canadians have become in their desperate attempts to exploit the dirty tar sands.