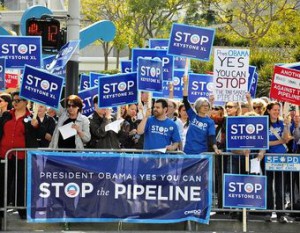 In his landmark speech on climate change yesterday, President Obama argued that the Keystone XL pipeline would only be built if it does not “significantly exacerbate” climate change.

“Allowing the Keystone pipeline to be built requires a finding that doing so would be in our nation’s interests,” the President said, adding “our national interest would be served only if this project does not significantly exacerbate the problem of carbon pollution.”

Of course it is seen as a no-brainer that if you build a pipeline that facilitates the extraction of one of the most polluting fossil fuels you will exacerbate climate change.

As the famous climate scientist Dr James Hansen has pointed out the Alberta tar sands contain somewhere between 360 to 510 billion tons of carbon, which is more than double that of all oil burned in human history. And once KXL is open, Hansen argues, “TransCanada will have every incentive to milk the massive tar sands basin for all it is worth.”

However just as environmentalists reacted positively to the announcement, the Canadians tried to spin it as good news too. Canada pointed out that the recent State Department report, which many organisations have dismissed as deeply flawed, forecast no significant increase in emissions if KXL was built.

“We agree with President Obama’s State Department Report in 2013 which found that, ‘approval or denial of the proposed Project is unlikely to have a substantial impact on the rate of development in the oil sands, or on the amount of heavy crude oil refined in the Gulf Coast area’,” said Joe Oliver, Canada’s Minister for Natural Resources.

It is this discrepancy which means in the words of the Washington Post,  “Obama may have left himself wiggle room to approve Keystone XL”.

However many commentators, including James Hansen have argued that the idea that the tar sands would get developed at the same rate without KXL is undercut by mainstream financial analysis and industry documents that show Keystone XL is the linchpin for tar sands expansion in the next decade.

Tar sands might eventually reach the market without KXL, but it will take a much longer time and greater cost. And both those may make the tar sands uneconomic.

As if to emphasise the point, TransCanada is now also proposing a new $5-billion pipeline that would transport the tar sands east from Alberta, called the Energy East pipeline project. Some seventy per cent of the pipeline route is already in the ground. But the company now plans to retrofit 3,000-kilometre of underused natural gas pipeline, which already runs through the region to take tar sands crude to refineries on Canada’s East Coast.

But the planned route is still at a conceptual stage, and faces many huge regulatory and political hurdles as it will transport oil through ecologically sensitive lands around the Rideau River and highly densely populated areas of Ottawa.  It would need approval from Natural Resources Canada as well as other regulators.

And, if the recent history of spills is anything to go by, the residents of Ottawa have real reason to be worried. They are likely to kick up a big fight and so the Energy East project is not going to be starting any time soon.