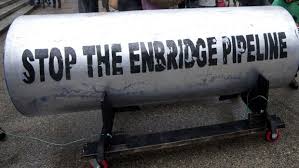 In the game of geo-political chess that that Canadian and Albertan governments are playing trying to get the dirty tar sands to market, one route to winning just got blocked.

It is seen as a significant setback for the company as well as the tar sands lobby trying to get its oil to market to the Pacific ports and to the hungry markets of China.

The BC government’s rejection of the pipeline increases the political stakes across the border on the impending decision by the Obama administration to approve the controversial Keystone XL pipeline. If Obama rejected KXL, it would mean the tar sands would be in serious, serious, trouble.

In its strongly worded final written submission to the pipeline’s Joint Review Panel, the BC government outlined how it having reviewed all of the evidence and submissions and asked substantive questions about the project, they did not get satisfactory answers, specifically on environmental and safety grounds.

“Our government does not believe that a certificate should be granted before these important questions are answered” argues BC’s Environment Minister Terry Lake. The BC government also reiterated five conditions it argues are a necessity for approval of the pipeline, including cutting edge oil spill prevention and response measures.

Terry Lake argued that Enbridge had presented “little evidence” as to how the company would respond to an oil spill across some of the most culturally and ecologically sensitive areas of Canada, including geologically active seismic areas.  “For that reason, our government cannot support the issuance of a certificate for the pipeline as it was presented to the joint review panel,” he said.

Christopher Jones, a lawyer representing BC said in a statement to the panel that “It is not clear from the evidence that Northern Gateway will in fact be able to respond effectively to spills either from the pipeline itself, or from tankers transporting diluted bitumen.”  The BC government’s submission added: “’Trust me‘ is not good enough in this case.”

As usual the Albertans dismissed people’s concerns as bordering on irrelevant. Alberta’s Environment and Sustainable Resource Development Minister Diana McQueen said: “Alberta respects the hearing process underway for the Northern Gateway pipeline, and we trust that the panel will make its decisions based on science and all the evidence that has been presented,” said McQueen.

More of that evidence was presented by Thomas Homer-Dixon from the Balsillie School of International Affairs, University of Waterloo, in the Globe and Mail on Friday.

Writing about how the tar sands is distorting the Canadian economy, he highlighted the obvious problem for the country of becoming over-dependent on the tar sands. What happens, he argues, if the world has placed a cost on carbon by 2030, when Canada’s output from the tar sands will is expected to be five million barrels a day, more than twice today’s output.

“We may soon find that we’re producing masses of stuff we can’t sell”, he writes. “The realities of climate change mean that the oil sands have a best-by date” he adds.

And that date could come much sooner than expected, especially if Obama now says no to KXL. Indeed a new book, entitled the Burning Question, argues that to address climate change would mean leaving most of the remaining fossil fuel reserves in the earth, including the tar sands.