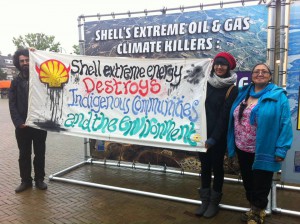 Today at Shell’s AGM, the company is focussed on saying goodbye to its outgoing chief executive Peter Voser who is making his last appearance on the podium. The company now  begins the search for his successor.

Two of the main issues that Voser’s replacement will have to face are the growing worldwide movements against the exploitation of the tar sands, and its so-far disastrous attempts to drill in the Arctic.

Indeed, Indigenous activists have travelled to the Hague to complain about the company’s activities. One of those to make the trip is Eriel Deranger, from the Athabasca Chipewyan First Nation (ACFN), who are located downstream from the dirty tar sands in Alberta in Canada. The ACFN is currently suing Shell for violating past agreements that have threatened their treaty rights.

The community is also locked in a battle with the oil giant over two new tar sands mines Shell is proposing to develop on their land. “Shell’s current and proposed tar sands projects violate terms of our treaty, destroy our land and contaminate waters critical to our survival,” argues Deranger.

She is not the only alone in standing up to Shell. Mae R Hank, a tribal member of the Native Village of Point Hope, is in the Hague to protest against Shell’s Arctic drilling operations. The company has spent nearly $5 billion securing permits to drill in Arctic waters. But the company’s foray so far has ended in farce.

Indeed yesterday a company official told a U.S. Coast Guard panel that days before a Shell drillship went aground in the storm-tossed Gulf of Alaska, it was clear that any towing failures could spell disaster for the vessel, the crew and the local fragile marine environment.

Indeed, Mae R Hank argues that “If an oil spill were to occur in the Arctic’s extreme conditions, there is no proven method to clean it up during Winter. Shell is taking a deadly risk with Inupiat and other Arctic Indigenous peoples’ cultures and food security for shortsighted profit, while the community faces long term consequences to their survival.”

But the company also faces other risks to its operations. Earlier this month in a move that has received hardly any press, Mora County in New Mexico banned oil and gas drilling due to concerns over fracking. It is the first county in the US to do so.

The local county commission passed a Community Water Rights and Local Self-Government ordinance, restricting the rights of corporations and establishing a local Bill of Rights. This gives the county full autonomy to protect its natural resources.

“We’re here as a county commission to protect the public welfare and the environment of our community, and I think the ordinance does that,” said John Olivas, the commission chairman. “Water is the most precious resource we have, and water protection and the right to clean air is definitely something we were targeting.”

What makes this worrying for Shell is that the company has leased more than 100,000 acres in eastern Mora County. Suddenly this acreage is worthless.

Shell also continues to be questioned about its dirty legacy in Nigeria, which it refuses to clean up. The company has just faced further questions at the AGM about flaring in Nigeria too.

Shell knows that the easy oil has largely gone, and the more extreme oil comes with greater ecological risks as well as community impacts.

Peter Voser may soon be history, and one thing is certain. His successor will have a few headaches from day one. And rather than take pain killers, it would be less painful for the oil giant to start disinvesting out of “extreme oil” and into clean energy.

For more on live tweets from the AGM go here.