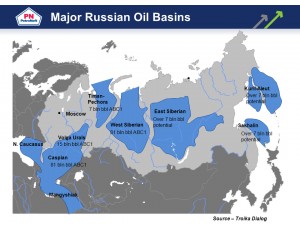 Slowly but surely, the fracking revolution spreads. Just take a look at some headlines in the Financial Times over the last six weeks or so: “Japan wakes up to US shale revolution”; “Mexico awaits its own shale revolution”.

And now it is Russia’s turn.

Yesterday the paper reported that “Russia is gearing up for an oil boom on the same scale as the US”. By all accounts the vast oilfields of Siberia also contain vast deposits of unconventional oil.

Leonid Fedun, the vice-president of Lukoil, told the FT that Russia would be able to maintain crude output at around 10 million barrels a day for years to come.

Much will depend on a field called “Red Lenin” or Krasnoleninskoye in Russian, which is being exploited by TNK-BP and Gazprom Neft and Royal Dutch Shell. They are soon to be joined by Rosneft and ExxonMobil .

Red Lenin is part of western Siberia’s vast Bazhenov Shale field (see image for map of Russian’s oil basins), which the Russians hope is bigger to America’s Bakken, which is now responsible for 10 per cent of America’s oil production.  Indeed Bazhenov could make the Bakken look like a minnow.

According to energy consultancy Wood Mackenzie, Bazhenov could hold 2 trillion barrels of oil in place, which is five times greater than the Bakken’s in-place number.

The problem for the industry is that no one knows how much of this is recoverable and the complex geology makes guessing even more difficult.

But in order to encourage investment the Russian government is proposing a 100 per cent waiver of mineral extraction tax from the region. But even if the companies prepare to drill, it won’t replicate the US just yet. As Guy Chazan reports in the FT “Whatever happens, it will take years for Russia to experience a shale boom on anything like the scale of the US.”

As Russia gears up for its own fracking revolution, Poland is set to effectively outlaw anti-fracking dissent. The Polish government is proposing new legislation which campaigners argue would “effectively eliminate the possibility of organised opposition.” This is happening in a country where campaigners say they are already operating in a “climate of fear”.

Under new laws being proposed, groups will only be able to participate in the legal debate over fracking if they have been in existence for over 12 months.

According to an article in Natural Gas Europe: “This will mean that community groups and organisations which have only just formed” in response to the government’s new ‘fracking’ plans “will be unable to participate in decision making processes that directly affect them.”

Lucy Patterson from campaigning network Push Europe argues. “It completely undermines the right of Polish people to voice concerns about issue as potentially socially disruptive and environmentally devastating as fracking …how can we expect progress to be made in a country that puts the fossil industry’s corporate profits before the rights of its own people?”

It also makes you think that the oil companies will relish working in Siberia. It may be cold and remote, but that also means there will be little protests and outside scrutiny of their operations.