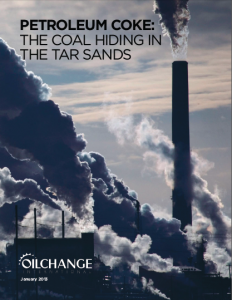 UPDATE, July 8, 2013: Click here to view a new infographic detailing how much petcoke Keystone XL would be responsible for if built.

See coverage of the report in the news

The Canadian tar sands have been called the “most environmentally destructive project on earth”, with good reason. Extracting tar sands bitumen from under the boreal forests of Alberta, Canada requires huge amounts of energy and water. It has cleared vast tracts of forest, left scars on the land that are visible from space and threatened the health and livelihoods of indigenous First Nations communities across the region.

It is a well established fact that full exploitation of the tar sands is a grave threat to the climate. Emissions from tar sands extraction and upgrading are between 3.2 and 4.5 times higher than the equivalent emissions from conventional oil produced in North America.On a lifecycle basis, the average gallon of tar sands bitumen derived fuel has between 14 and 37 percent more greenhouse gas emissions than the average gallon of fuel from conventional oil.

But as bad as these impacts already are, existing analyses of the impacts of tar sands fail to account for a byproduct of the process that is a major source of climate change causing carbon emissions: petroleum coke – known as petcoke. Petcoke is the coal hiding in North America’s tar sands oil boom.

Petcoke in the tar sands is turning American refineries into coal factories.

“PetKoch”: The largest global petcoke trader in the world is Florida based Oxbow Corporation, owned by William Koch – the brother of Charles and David Koch.

To date, the impacts of petcoke on the local and global environment have not been considered by regulatory bodies in assessing the impacts of the tar sands. Petcoke’s full impacts must be considered by the European Union in its debate on the Fuel Quality Directive, by the U.S. State Department in its consideration of the climate impacts of the Keystone XL pipeline, and by Canadian, American, and European governments in tar sands policies across the board.