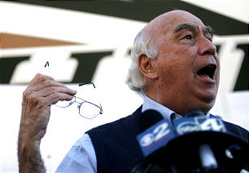 One of America’s top reporters who exposes the antics of the coal industry is being sued for libel by one of the largest independent coal barons.

Ken Ward JR, who has been labelled as “one of the nation’s top coal reporters” by Columbia Journalism Review, is being sued by Murray Energy and its owner Bob Murray, for an article he wrote in July in the Charleston Gazette. It was entitled: “Mitt Romney, Murray Energy and coal criminals.”

Ward writes the popular “Coal tattoo” blog, described by Greenwire as “a must-read” for “people who follow the coal industry and mining” and that “the longtime reporter is known for pulling no punches in his analysis of issues related to climate change, mine safety and pollution.”

In the disputed post, written last month, he certainly pulled no punches in criticising the controversial coal baron Bob Murray, one of the largest independent coal producers in the US.

The Huffington Post has described Murray as “an outspoken climate-change denier who captured national attention in 2007, following a collapse at his company’s Crandall Canyon mine in Utah that killed six miners and three rescue workers. Murray Energy’s history of unsafe practices has resulted in hundreds of citations and millions in fines.”

In the disputed blog, Ward wrote that “that renegade coal operator Bob Murray played a major role recently in a campaign fundraiser in Wheeling, W.Va., for Republican presidential candidate Mitt Romney.  Readers of this blog know well the record of Mr. Murray’s company at the Crandall Canyon Mine in Utah, and may recall that one of Murray’s subsidiaries pleaded guilty to criminal mine safety violations related to the August 2007 disaster that killed six miners and three rescue workers.”

He continued: “What you may not have heard — and certainly won’t see reported by the media outlets that constantly promote the notion of a “war on coal” by the Obama administration — is that another of Murray’s subsidiaries recently pleaded guilty to criminal Clean Water Act violations at one of its operations in Ohio.”

However Murray’s lawsuit says Ward’s blog post is of a “false and defamatory manner implying that Plaintiffs Murray, Murray Energy, American Energy, and Ohio Valley are criminals,” which “intended to convey, and did convey to the average reader, the false impression that Plaintiffs are criminals and act contrary to the public interest and /or in violation of laws.”

It adds that “In reality, Murray has a reputation for integrity and honesty, is not a criminal, has never killed anyone, and has diligently worked to preserve the environment.”

Murray is seeking more than $150,000 in damages from the Gazette.

A pretrial conference is scheduled for later this month.

To view the complaint go here.