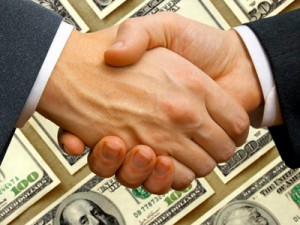 Just as the oil and gas industry buys influence on Capitol Hill and in state capitals across the country, so too can it
buy friends at major universities who support its agenda.

A recent Bloomberg article highlights just how close, and influential, these ties can actually be.

The article details how the Marcellus Shale Coalition, a consortium of about 300 companies promoting natural gas development, provided a grant of $100,000 to researcher Tim Consodine, then at Penn State University. Consodine subsequently penned a 2009 report that argued that companies interested in drilling in Pennsylvania would be turned off by a 5% tax, proposed by then-Governor Ed Rendell.

That report was influential in defeating Governor Rendell’s proposal to charge a 5% levy on the value of natural gas produced, plus another 4.7 cents for every 1000 cubic feet, which would have generated approximately $100 million in its first year alone. Consodine’s report argued that drilling would decline by more than 30% if the tax were in place.

There’s a pretty clear reason why the natural gas industry would want to influence policy regarding fracking in Pennsylvania.  The state is located over the extensive Marcellus Shale, which according to the U.S. Energy Information Agency’s 2012 Annual Energy Outlook contains 141 trillion cubic feet (TCF) of unproved technically recoverable natural gas. Thanks in part to industry efforts, the Keystone State is also the largest U.S. state without a tax on natural gas production.

The state legislature has recently approved an “impact fee”, which municipalities can choose to enforce on drillers to cover the cost of things like road damage. It’s estimated to generate about $85 million this year.

The example in Pennsylvania highlighted by Bloomberg isn’t a unique case, unfortunately. It’s been estimated that 6% of academic research funding comes from private entities like the Marcellus Coalition. And that was in 2008, before much of the impact of the financial crisis on state funding for public institutions had sunk in.

And the industry’s tactics work. Not only have industry groups succeeded in influencing related studies at the University of Texas and SUNY Buffalo, the author notes, but these are the exact tactics used so successfully by the tobacco lobby to avoid regulations for so many years. We’ve already seen the industry employe these same tactics by paying scientists to promote climate change denial.

The problem isn’t necessarily that researchers are coming to these conclusions, assuming they are well researched; the problem arises when they hide their connections to the industry, and promote clear industry-friendly agendas they perhaps wouldn’t defend if money were out of the equation. William Easterling, the dean of Penn State’s College of Earth and Mineral Sciences, remarked that Consodine’s work “should be more scholarly and less advocacy-minded”.

A recent report in the Associated Press highlighted some uncertainties around fracking science, and has been generating lots of noise from those supporting this dangerous technology, who say anti-fracking activists are overzealous in their opposition. But in fact, what it highlights is that there are still a lot of unknowns out there and that we need to be careful about what we believe.

No, we don’t fully understand the impacts of fracking. But that’s the point. It’s an unproven technology that at best helps to continue our dependence on fossil fuels and at worst has terrible impacts on water, air, communities and public health. While we continue to paint the complete picture, shouldn’t we be slowing down the “gold rush” mentality that marks the current natural gas boom?  At the very least, shouldn’t our public institutions continue to serve the public good without bias?

As the industry fights to gut the power of public regulatory bodies like the Environmental Protection Agency, our politicians are turning around and taking money from oil, gas and coal interests hand-over-fist. Pennsylvania Senators Pat Toomey and Bob Casey have together taken over $675,000 from the industries since 2000.

For far too long, dirty industries have been polluting not only our air, land and water, but our politics and increasingly, our universities as well. It’s time for our decision-makers and the public to pay attention to what really matters: good science, unbiased research, and sound policies that prioritize the public good and not the profits of dirty energy companies.