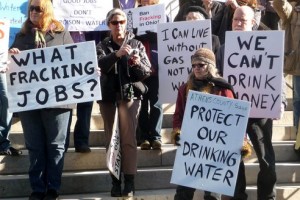 Slowly but surely the evidence is growing against fracking, as the authorities struggle to protect public health and drinking water.

A report published yesterday in the Proceedings of the National Academy of Sciences by Duke University professors found that there could be natural paths in the rock that connects the frack zone with drinking water.

The study shows that briny fluids may have migrated from deep within Pennsylvania’s Marcellus Shale, one of the formations at the heart of the fracking revolution, into shallow aquifers hundreds of feet above.

And logic suggests that if natural briny fluids can travel through layers of rocks, fracking fluids could, too.

“The industry has always claimed that this is a separation zone, and there is no way fluids could flow” from the shale to the aquifers, said Avner Vengosh, a geochemist at the Nicholas School of the Environment at Duke University, one of the study’s authors.

“The fact that it’s a mile or two miles apart doesn’t mean that there’s separation,” he added. “Because there is a hydraulic connection, it increases the risk of contamination.”

And that is the important bit. The oil industry has always said that the frack zone and the drinking water zone were too far apart, and to quote Rudyard Kipling, never the twain shall meet.

So this study shows that the two can combine.

However the oil industry has been quick to seize on the fact that the study does not prove that fracking fluid had polluted drinking water.

But let’s remember that this is not the first scientific survey to reveal such results. Back in May a paper, published in the journal Ground Water, also raised serious concerns about the safety of fracking.

And with impeccable timing, a report released yesterday by OMB Watch added to the growing concerns about fracking.

The report, The Right to Know, the Responsibility to Protect: State Actions Are Inadequate to Ensure Effective Disclosure of the Chemicals Used in Natural Gas Fracking, examines state disclosure rules and identifies the gap between effective policy and existing practice.

It is alarming fact that due to a major flaw in the Energy Policy Act of 2005, natural gas fracking activities have been exempt from federal oversight under the Safe Drinking Water Act. As a result, oversight of fracking has shifted to the states.

And as the fracking boom intensifies, many states are struggling to keep up and protect communities and their drinking water.

“Public officials in state government are struggling to find a way to protect water supplies and public health in the wake of the rapid expansion of natural gas drilling and extraction. They haven’t gotten it right yet,” argues Katherine McFate, president of OMB Watch. “Some of the chemicals used in natural gas fracking have been linked to serious health problems, including cancer and kidney, liver and neurological damage, so it is imperative that local water supplies be carefully monitored and protected.”

Especially now we know that the twain can meet.