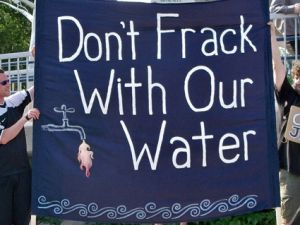 Sorry to hark on about this – but proponents of fracking keep on saying it is a precise science that is safe, which will not contaminate water supplies.

But we know that is not true. We also know the technique is still essentially in its infancy and the science and detailed surveys into the controversial technique still have not been carried out.

So the industry is pressing ahead before we really fully understand the risks.

And now the first peer reviewed research evaluating the risks of fracking chemicals being able to contaminate drinking aquifers has reached alarming conclusions.

The scientific paper, published in the journal Ground Water, once again raises serious concerns about the safety of fracking.

The paper, which specifically examined the Marcellus Shale in the US, concludes that: “Interpretative modeling shows that advective transport could require up to tens of thousands of years to move contaminants to the surface, but also that fracking the shale could reduce that transport time to tens or hundreds of years”.

Put simply, fracking chemicals injected into the ground could migrate toward supplies of drinking water far more quickly than it had been previously thought.

The oil industry – and fracking proponents – argue that layers of impermeable rock prevent fracking chemicals reaching groundwater. There is no way the two can meet.

But the new study, which used computer modelling, blows this argument out of the water.

It concluded that fracking exacerbates the natural faults and fractures in the Marcellus shale, which could allow chemicals to reach the surface in as little as “just a few years.”

“Simply put, [the rock layers] are not impermeable,” the study’s author, Tom Myers, an independent hydrogeologist told Propublica. “The Marcellus shale is being fracked into a very high permeability. Fluids could move from most any injection process.”

The study used computer modeling to predict how fracking fluids would move over time. Where man-made fractures intersect with natural faults, or break out of the Marcellus layer into the stone layer above it, the study found, “contaminants could reach the surface areas in tens of years, or less.”

The worrying thing for the oil industry and communities facing fracking is that many areas where fracking is occurring have even greater permeable rock than that analysed in the survey.

“One would have to say that the possible travel times for a similar thing in Arkansas or Northeast Texas is probably faster than what I’ve come up with,” Myers said.

And what about shales outside the US?