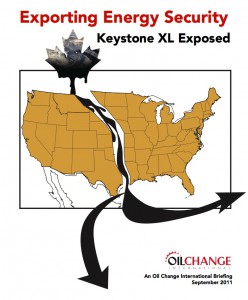 In September 2011, we first reported that the refineries that will receive crude from the proposed Keystone XL pipeline are increasingly focused on exports.

We can now reveal that in the last quarter of 2011, 73% of gasoline produced in Port Arthur and Houston area refineries was exported as was 40% of diesel production. Put together, the majority of these two prime transport fuels produced in these refineries went to export markets; 51%.

Port Arthur and Houston refineries are the main destination for oil that would be delivered on Keystone XL.

We have heard all sorts of bluster from the likes of the American Petroleum Institute about the burgeoning export trend at U.S. Gulf Coast refineries. In response to Congressman Markey’s (D-MA) legislative proposal to allow the pipeline only if the products refined from the oil it delivers are restricted to the U.S. market and not exported, the API said this:

You can always tell someone’s struggling to defend themselves when their response to an argument is to present evidence that is a number of degrees removed from the subject initially being discussed.

The issue is not total U.S. exports but the exports from the specific refineries that will receive oil from Keystone XL. Further, 2010 is not indicative of future trends as the export trade has boomed in 2011 and is forecast to continue to grow.

When we do look at the most recent data for the actual refineries involved, we find a very different situation to that which the API describes. Rather than this being about products that are not in high demand in the U.S. market, these refineries are exporting most of their gasoline and a significant proportion of their diesel. What’s more they have been reconfiguring refineries to produce less gasoline and more diesel fuel as diesel is in high demand on international markets and generally fetches a higher price than gasoline. Since 2005, gasoline production at Texas Gulf Coast refineries  declined 66% while diesel production increased 18%.

Industry will no doubt argue that this is nonetheless good for jobs and the profitability of refineries. But surely we need to have a serious debate about the role of projects like Keystone XL and U.S. energy security. This is not about lowering gas prices or enhancing the supply of oil products to the American consumer. Keystone XL is about expanding the market for Canadian oil beyond the United States and boosting oil industry profits.

Politicians and the public need to be clear about one thing before we can have a serious debate about these issues. The oil industry has only its own interests at heart at all times and Keystone XL is no different. It is their fiduciary duty to maximize returns for shareholders regardless of U.S. national security objectives. What’s good for oil industry profits is rarely good for consumers. And here we’re not even discussing the climate or our air and water quality. The security of this nation and its economic success does not rest on export pipeline projects but on accelerating a transition away from dirty polluting fuels and towards a prosperous clean energy future.