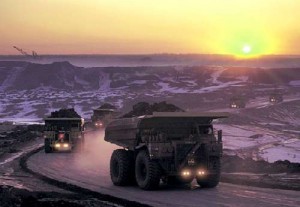 One of the key questions for the past decade for many in the oil-game has been where China, this vast emerging super-power, is getting access to its oil and will access it in the future.

We know that it is crawling all over Africa buying up resources and doing deals with dubious regimes, indifferent to their human rights.

We also know that recently the Chinese have arranged oil supply contracts with Russia, Kazakhstan, Brazil and Venezuela. Chinese oil companies have also become involved in joint ventures in Iraq and Australia.

But there is a growing Chinese interest in Canada and that could increase dramatically, which has global ramifications for the climate.

I have blogged on the Chinese buying up the tar sands before, but as the debate over Keystone XL pipeline comes to crunch-time in the US, it might come as something of a surprise for many to find out how much the Chinese have invested in the dirty tar sands.

According to an investigation by the Houston Chronicle, the Chinese have invested $15 billion in the past 18 months in Alberta alone.

Earlier this year, the investments continued, when CNOOC acquired the bankrupt OPTI Canada, whose main asset was a 35 per cent working interest in Nexen’s Long Lake oil sands project.

For the Chinese the draw of Canadian oil is that it is away from the volatile Middle East and is therefore seen as a relatively low-risk investment. This is despite there are huge difficulties getting the oil from Canada to the Asian market and the world-wide condemnation of the carbon intensity of the fuels.

Oil industry consultants IHS CERA – whose reports on the carbon intensity of the tar sands -are used by the Canadians as lobbying vehicles in Europe – estimate that some $100 billion will be spent on the tar sands in the coming decade.

So many in the oil industry welcome the Chinese cash and welcome sending the tar sands all the way to China.

Alberta Minister of Energy Ronald Liepert argues that “there is a long-term plan to get oil to the East, and it will happen.”

He argues that the influx of capital can help companies ramp up production and expand operations at existing projects. “Plants that are currently 25,000 barrels a day, they want to expand to 100,000 barrels a day, and they don’t have the capital to do that,” he said. “So they’re actually on the prowl for investment – and there’s real money in China.”

So despite the risks to the climate, the oil industry is gearing up for expansion. “With the oil sands, you’ve got a significant resource – 173 billion barrels of oil recoverable with current technology, and that’s only going to get better,” Nick Olds, the senior vice president of oil sands for ConocoPhillips Canada.

“If you look at other areas of the world,” he said, “it is very difficult to get access to (the) resource.” By contrast, the oil sands in Canada are “not state-controlled and they’re not government-owned.”

But currently there is no way getting the oil to the Asian markets. The most likely corridor – the Northern Gateway pipeline proposed by Calgary-based Enbridge – is being vigorously disputed by environmental groups and indigenous communities worried about damage from oil spills. It has been dubbed the “Pipeline through paradise.”

PetroChina is rumoured to be investing $2 billion in the project. And if and when this is completed, expect Chinese investment in the tar sands to rocket.

But until that happens, one academic from the China Institute at the University of Alberta  notes that for the moment “crude produced by Chinese capital in Canada is only flowing south to the US market, helping to the secure US energy supply.”

But do not expect that to last.  For Canadian oil could soon be heading East.