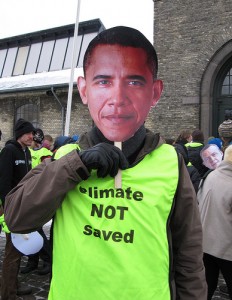 The president presented some encouraging words at Georgetown University today when he spoke about the urgent need to address America’s energy security. As he so often does, he correctly identified the problem the nation faces in continuing to rely on dirty forms of energy that pollute and cause climate change and particularly on oil, the price of which is currently causing Americans economic pain.

But as usual the President chose to take a ‘let’s try and please everyone’ approach and missed a number of opportunities to get at the heart of the problem. The President made a passing reference to Canadian oil, the impotency of which I discussed in my blog earlier today. He also threw bones to the drill baby drill crowd by suggesting that his administration is assessing new frontiers in the outer continental shelf and Alaska.

And then he said something right. He said, “But let’s be honest – it’s not the long-term solution to our energy challenge.  America holds only about two percent of the world’s proven oil reserves.  And even if we drilled every drop of oil out of every one of those reserves, it still wouldn’t be enough to meet our long-term needs.”

He went on to outline his support for efficiency measures, support for alternative fuels, electric vehicles and just about everything else that might sound like a good idea, some of which, such as more nuclear energy or “clean coal” clearly aren’t.

There are some of the right ideas in there. Mandating federal fleet efficiency, supporting high speed rail and other mass transit solutions, creating incentives for development of next generation batteries and other clean tech solutions; all of this is going in the right direction. But then he missed the opportunity to address one of the key issues of the day.

He acknowledged that these programs will cost money; big money. But he failed to maintain his call for one of the key strategies for paying for these important investments; take the $4 billion in annual subsidies to Big Oil that he identified in the State of the Union speech and invest it in the real solutions to our oil dependence. It’s a budget neutral solution that could go a long way to funding the transition to clean energy. Further, this is not the full extent of subsidies and financial assistance the industry receives.  But since the SOTU speech this has disappeared.

What happened Mr. Obama? Did Big Oil get to you too? It’s time to listen to the vast majority of the American public who support removing subsidies for the oil and gas industry in order to support the clean energy transition and let Big Oil use its own trillion dollar profits to dig themselves deeper into their hole. That’s the blueprint for a secure energy future we need.