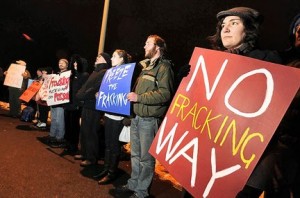 Despite the ongoing serious concerns about pollution from hydraulic fracturing or fracking in the US, the technology is set to be used in the UK too.

Such is the concern in the US that the state of New York has issued a moratorium on the practice.

The US Environmental Protection Agency is also currently undertaking a two-year study into its effects.

But the technique is going to be used in the North West of the UK, near the famous holiday resort of Blackpool, where substantial deposits of shale gas have been found in the Bowland shales.

The company Cuadrilla Resources has been exploring the Bowland shales for the last year, and is now pushing for full blown expansion, arguing that shale gas could potentially meet up to 10 per cent of the UK’s energy needs.

Its major shareholder is the Australian mining company AJ Lucas, that has described its Blackpool test well as the “first ‘true’ shale gas well ever drilled in Europe”, adding that the finds “confirm and possibly exceed expectations”.

Other investors in Cuadrilla include the private equity fund Riverstone Holdings, which manages around $17 billion across six investment funds, and has BP’s ex-CEO John Browne as one of its managing directors.

But already the same groups that have campaigned against the dirty Canadian tar sands are warning of fracking dangers, with the Co-op helping distribute Josh Fox’s Oscar-nominated film, Gasland, as well as producing a report on the dangers of the technique.

Greenpeace is also concerned. “Shale gas is transforming the world market for gas, but there are a lot of unanswered questions, particularly in the way that fracking is overseen,” Charlie Kronick, Greenpeace’s senior climate campaigner, argues. “There have been huge problems in America with the impact on groundwater.”

In a media interview late last year he said: “There are certain cases in the US where certain operators have been documented as having some issues and they do exist but I think we have done everything here, working with the Health and Safety Executive and the Environmental Protection Agency to ensure that it doesn’t happen on Cuadrilla’s location.”

The company expects to be able to decide on commercial development of the gas by around the end of the first quarter this year.

Cuadrilla is also looking to exploit the technology further afield, holding acreage in the Netherlands, Poland, Hungary and Czech Republic.

However some analysts believe that the shale gas boom sweeping America will not materialise so quickly over here.

“The development of unconventional gas in Europe is likely to be a long-term story, and is unlikely to become a sudden gas revolution as in the US”, argued a report by the Oxford Institute for Energy Studies, last month.

They concluded that “there will be no significant production before at least 2020”.

And ironically Josh Fox’s documentary examining the dangers of fracking, Gasland, is set to open this month across the UK.

It includes the iconic image of someone being able to set fire to their water because it is so contaminated.

Maybe the Blackpool Tourist Board should watch it..