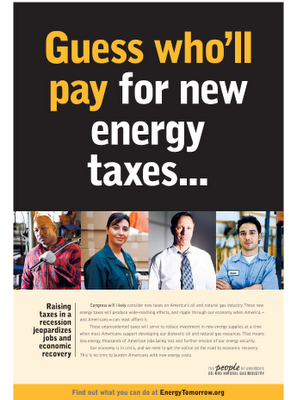 The good old American Petroleum Institute is up to its old tricks again, scaremongering over jobs.

The API held “citizen” rallies in seven cities in early September to discuss the effect of energy legislation on jobs, arguing that many jobs were under threat.

To coincide with the lobbying effort, two weeks ago, the API put out a survey supposedly showing that Americans overwhelmingly oppose raising taxes on America’s oil and natural gas industry.

“Voters fear that raising taxes on an industry that provides most of their energy and supports more than 9.2 million jobs would hurt them and damage the economy,” said API President and CEO Jack Gerard.

Jack throws round this 9.2 million figure with authority – using it like a mantra.

It was about a year ago that in September 2009, the API started using the 9.2 million figure,  whereas before the figure had been about 6 million.

Suddenly the API had found a way to add 3 million people being employed directly and indirectly by the industry.

That’s a lot of people. I wonder where they were all hiding?

Did all these drilling engineers not really know who they were working for?

Take what the API said at the Senate Climate Hearings in July last year:

A month earlier, the API wrote to members of Congress regarding the passage of the Waxman-Markey Bill:  “The oil and gas industry, alone directly and indirectly supports 6 million American jobs.”

That’s 3.2 million less than the figure they are now using. You can’t come up with 3 million more jobs, without some accounting whizardry or by simply fudging the figures.

They are also fudging the figures over tar sands too.

Citing the need to protect U.S. jobs and America’s energy security, the API and two other business lobby groups have intervened in a legal case that is trying to prevent the Pentagon using fuels from the tar sands.

API, the National Petrochemical and Refiners Association and the U.S. Chamber of Commerce have intervened in a lawsuit filed in June by the Sierra Club and the Southern Alliance for Clean Energy seeking to stop the department from buying fuels derived from crude oil produced from Canadian oil sands.

“Over the next five years, Canadian oil sands development could lead to an additional 343,000 jobs in the United States,” said Bob Greco, API’s downstream director. “Those are jobs that our struggling economy could certainly use – and as the economy recovers, it could also use the half a billion barrels per year of crude oil that Canadian oil sands could provide.”

In their lawsuit, the environmental groups had alleged the Pentagon is not complying with section 526 of the 2007 energy bill requiring the agency not acquire fuels derived from crude oil sources, such as tar sands, which have higher greenhouse gas emissions than conventional sources.

API argues it impossible for the Pentagon to determine which fuels are derived from oil sands crude, preventing it from being able to comply with Section 526.

Bob Greco added “And, contrary to claims, the lifecycle of greenhouse gas emissions from the crude oil from oil sands are comparable to those from other crude oils refined in the United States”.

Once again we know that to be the case. There are countless surveys showing that tar sands are more energy intensive.

More trickery from the API. But you know what they say about statistics.