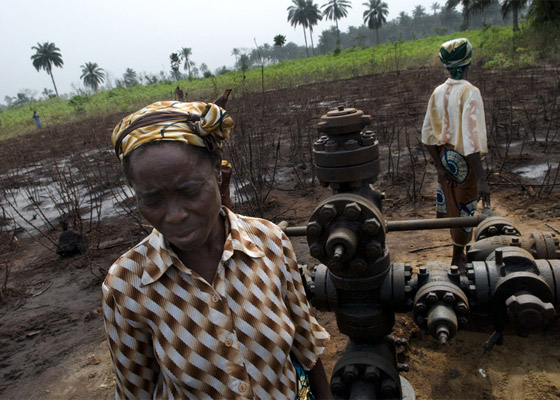 Five years ago, I co-authored a book called “The Next Gulf- London, Washington and Oil Conflict in Nigeria”, that  – as the title suggested – looked at the interlinked nature of oil politics from America, the UK and West Africa.

In part the book details the grievances of the people of the Niger Delta – one of which is the chronic and routine pollution of the land and its people.

On top of the daily pollution you need to add gut-wrenching poverty, mindless gas flaring and the systematic collusion between the oil companies and trigger happy military and you have a recipe for disaster.

The Niger Delta has been a weeping disaster zone for fifty years, largely unseen or unnoticed by the outside world. It took the raw courage and belligerence of the Nigerian writer Ken Saro-Wiwa, to bring the sordid story of Shell’s double standards, complicity in violence and pollution into the living rooms of Shell’s customers in Europe.

It took his death for the world to really sit up and take notice. But memories are short and events move on.

It is now 15 years since Ken’s death, but for many in the Niger Delta, the issues he fought and died for are as real as the moment he was callously murdered by a brutal elite, determined to enrich their pockets with blood money.

Occasionally the Delta reaches the newsrooms of the West – mainly now if a western oil worker is kidnapped – but apart from that their desperate plight goes laregly unnoticed.

I have even had one fickle news editor say “We have done Nigeria” when pushing him a story – as if to say that the plight of the people of this great continent is only worth a story every few years. Let’s get back to Beltway gossip and celebrity tittle tattle – the stories that really matter.

For what BP is doing to the Gulf of Mexico, Shell and other western oil companies has been doing for years to the Niger Delta.

So credit to the BBC for running an article called: “Nigeria: ‘World oil pollution capital’”, and for highlighting how the Delta has some 300 oil spills every year, some 7000 between 1970 and 2000.

But unlike in the Gulf of Mexico the oil spills do not get cleaned up. “Site after site visited by the BBC – in both Bayelsa State and Ogoniland – had happened months before, and still not been cleaned up”, the corporation’s journalist noted.

And credit to the New York Times for reporting on it too. “Big oil spills are no longer news in this vast, tropical land. The Niger Delta, where the wealth underground is out of all proportion with the poverty on the surface, has endured the equivalent of the Exxon Valdez spill every year for 50 years by some estimates. The oil pours out nearly every week, and some swamps are long since lifeless.”

The paper continued: “That the Gulf of Mexico disaster has transfixed a country and president they so admire is a matter of wonder for people here, living among the palm-fringed estuaries in conditions as abject as any in Nigeria, according to the United Nations.”

“President Obama is worried about that one,” Claytus Kanyie, a local official, says of the Gulf spill, standing among dead mangroves in the soft oily muck in the Delta. “Nobody is worried about this one. The aquatic life of our people is dying off. There used be shrimp. There are no longer any shrimp.”

Another person tells the paper that “We don’t have an international media to cover us, so nobody cares about it. Whatever cry we cry is not heard outside of here.”

But now the cry is being heard. Nearly fifty individuals and organisations have released a letter calling for a new New Compensation Body to Address Oil Spills in the Delta.

Their statement reads: “BP’s Gulf of Mexico disaster has heightened international concerns about the environmental dangers of offshore drilling around the world and led to President Obama declaring it America’s ‘environmental 9/11′”.

“This oil spill has been correctly identified as a massive emergency and it is time to recognise that the ongoing oil spills, conflict and human rights abuses in the Niger Delta should also be acknowledged as an emergency demanding a concerted international response.”

They continue: “The lack of parity in the levels of response afforded to the US Gulf of Mexico oil spill, when compared to that given to the ongoing devastating spills in the Delta, have prompted us to highlight this situation and call for urgent action by the US, British and Nigerian governments and oil companies including ExxonMobil, Shell and Chevron”

The statement ends: “We believe that the following steps are needed to address the issues of oil spills and environmental degradation in the Niger Delta:

In the short term:
–       Oil companies including ExxonMobil, Shell and Chevron and the Nigerian Government must recognise that the very nature of oil production is a direct risk to the environment.  Therefore, it is their responsibility to set aside funds, which can be administered independently, for dealing with oil spills.
–       A prompt response mechanism must be established to ensure containment of oil spills and address critical social needs brought about by oil spills.
–       All previous and present Environmental Impact Assessments must be made publicly available.
–       All the Joint Investigation Team (JIT) reports must be made publicly available.
–       Oil companies operating in the Niger Delta must adhere to international standards and change all oil pipelines every 15 years.

In the medium term:
– Post Impact Assessment (PIA) must be carried out and published
– Photos of oils spills must be publicly published within 48 hrs of the spill
– Communities should expect a response, within 24 hours, to any reports of oil spills from themselves or others.

Finally, they argue that in the long term:
– An independent body should be established that is funded through an environment insurance bond based on an agreed percentage of oil revenue. This body should have the responsibility and resources to identify, respond to, compensate for, clean, remediate and restore oil spill sites. The board of such a body should be cross representational of civil society, government and major oil companies. The body should be based on and uphold international best practice with transparency embedded throughout all tiers of operation.”

Let’s see if anyone is really listening..