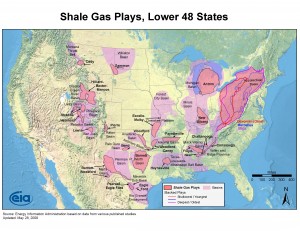 Don’t you just love it? As some 45,000 people – from governments, to business to NGOs talk about climate change and how to tackle it, the oil boys just get on with business, regardless of any outcome.

Exxon has just made the largest play in the energy market for four years, and no – its not investing in renewables or getting out of fossil fuels, just as the Copenhagen delegates would like.

Its investing instead in unconventional gas.

In an all-stock deal worth $41 billion, Exxon has bought XTO, allowing Exxon to move into unconventional – or shale gas – gas.

The US has seen major investment in shale gas in the last few years and in some sense Exxon is playing catch up to this fastly growing market.

In order to maintain the production of oil and gas, companies have developed technology to access reserves that were previously inaccessible.

Now you could argue that the more money Exxon puts into gas rather than oil or unvonentional oil – like tar sands – is a good thing for the climate, as gas is cleaner than oil and much cleaner than coal. You could also argue that if this gas shuts down one of America’s notoriously inefficient coal-fired power stations – that can only be a good thing too.

But shale gas will be more energy intensive to produce than normal gas. As a report co-published by Oil Change, argued earlier in the year: “Deepwater, tight gas, shale gas, liquefied natural gas, enhanced oil recovery and oil sands production are all examples of how the industry has developed technology to access more oil and gas from the decreasing pool of hydrocarbon reservoirs they have access to. There is a fundamental problem for the industry though: all of these forms of production are to different degrees more energy intensive than traditional methods.”

But most importantly, what Exxon has not done is moved out of fossil fuels and made a crucial play into renewables, just at a time when climate change is a key political priority.

So Exxon’s short term bet is still on fossil fuels. “This is not a near-term decision; this is about the next 10, 20, 30 years,” Rex W. Tillerson, the chairman and chief executive of Exxon, said in a conference call on Monday. “We think there will be significant demand for natural gas in the future.”

As the New York Times says: “The acquisition extends Exxon’s bet that fossil fuels will remain a critical part of the nation’s energy supply for decades.”

It has been estimated that it will take a mind-boggling $1 trillion to develop domestic shale fields. Just image what that kind of money could have done to the renewable market.