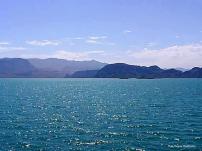 Another day and another disaster looms over climate. Lake Mead, the vast reservoir for the Colorado River water that sustains the fast-growing cities of Phoenix and Las Vegas, could lose water faster than previously thought and run dry within 13 years, according to a new study by scientists

The lake, located in Nevada and Arizona, has a 50 percent chance of becoming unusable by 2021, the scientists say, if the demand for water remains unchanged and if human-induced climate change follows climate scientists’ moderate forecasts, resulting in a reduction in average river flows.

“We were really sort of stunned,” one of the scientists Professor Barnett told the New York Times. “We didn’t expect such a big problem basically right on our front doorstep. We thought there’d be more time. You think of what the implications are, and it’s pretty scary.”