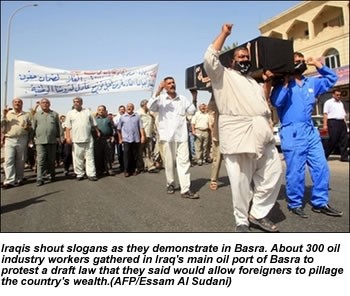 Basra, Iraq – On Monday, hundreds of Iraqis, led by the Iraqi Federation of Oil Unions (IFOU), took to the streets of Basra to demand that the Iraqi Parliament reject the proposed Oil Law. [1]

Simultaneous demonstrations took place in Amara and Nassiryya. Local governate officials made statements in support of the demonstration and, along with the governor of Basra, have committed to sending letters to the Minister of Oil supporting the Union’s demands.

Hassan Juma’a Awad al Assadi, President of the IFOU, charges that the proposed Oil Law surrenders Iraq’s economic sovereignty to multinational oil companies: “‘We will lose control over Iraqi oil. Therefore, the social progress in Iraq will be curtailed substantially, because the oil companies want huge profits; they are not concerned about the environment, wages, or living conditions…” The IFOU calls for immediate and complete withdrawal of all foreign forces from Iraq. The union represents 26,000 members in 10 state oil and gas companies across four governorates in the south of Iraq.

The Union was moved to public protest after initiating a strike on June 4, 2007 over a range of workplace issues and in opposition to the proposed Oil Law. IFOU leaders have said their members are prepared to strike again in defense of their nationalized oil industry. Iraq’s oil has been in the public sector since the 1970s.

The call to demonstrate was also sparked by increased pressure by the Bush Administration on the Iraqi Parliament to pass the Oil Law which would open two thirds of Iraq’s oil to foreign control through contracts that could last as long as 30 years.

Adoption of the law is one the benchmarks imposed on Iraq by the U.S. as a condition of continued reconstruction aid and support for the Maliki government.

Unions, other organizations and individuals around the world are calling on their elected representatives to demand that the U.S. government stop pressuring the Iraqis to pass the Oil Law. In the U.S., the labor and anti-war movements are calling on members of Congress who say they’re against the war to drop the Oil Law benchmark and cease all U.S. pressure on the Iraqis to transform their oil industry for the benefit of multinational oil corporations.
For video of the demonstration use this link: http://www.liveleak.com/view?i=cee_1184590207
[1] Demands from the Iraqi Federation of Oil Unions to Parliament include to:

(3) abolish the recently announced hike in oil and gas prices in Iraq; and