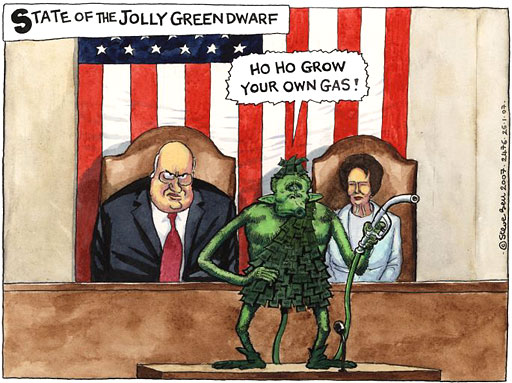 Jan Kowalzig of Friends of the Earth Europe said that whilst ethanol from corn is “carbon neutral”, production of ethanol requires fossil fuels.

“Transportation of the fuels, processing of the fuels – all that requires energy which is currently driven by a fossil-fuel economy. So all these biofuels projects currently add to the greenhouse-gas effect”.

Frances Beinecke, the president of the Natural Resources Defence Council “Turning coal into liquid transportation fuel, for instance, would generate nearly twice the amount of global-warming pollution that today’s petroleum-based fuels do. Wrongheaded approaches would prove counter-productive – we could end up with somewhat more efficient vehicles running on much dirtier fuels that further accelerate global warming,”

The cartoon above is what award-winning Guardian cartoonist Steve Bell thinks of Bush’s speech too.

What more can one say?