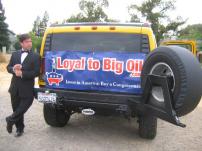 I pledge allegiance to Big Oil,
run by the richest CEOs in America,
and to the gas pump from which it flows:
one profit margin, unchecked by Congress,
with higher gas prices for all!

Loyal to Big Oil—a partnership between Billionaires for Bush and Oil Change International’s Separation of Oil and State campaign—is a strategic media campaign using humor to highlight the negative impact of energy-industry lobbying on our economy, environment and foreign policy.

Loyal to Big Oil, a consortium of oil barons, oil company CEOs and giddy traders on the energy futures market is taking to the streets to ask American consumers to take an oath of loyalty to Big Oil. Saturday Sept. 23rd saw actions in twelve cities around the US, including Orlando, Boston, Phoenix, Los Angeles, and New York.

Each Loyal American will declare: “I pledge to support Big Oil, whatever the cost to everyday Americans like me. I will cheerfully pay at the pump, no matter how high the price goes, because I want the oil industry to make record-breaking profits at my expense. I want my representatives in Congress to give billions to Big Oil while passing laws that undermine our economy and the environment. I pledge to defeat Separate Oil and State and will work to keep Oil Money in politics, where it belongs. I am Loyal to Big Oil.”

The Separation of Oil and State coalition has begun calling on members of Congress to represent their constituents’ interests, not Big Oil’s, and to take a pledge not to accept campaign contributions from the oil industry. “That’s why we’re here asking people to take the “Loyal to Big Oil” pledge,” said Hally Burton of Melbourne, FL. Handing out copies of the pledge in Nevada City CA, alongside fellow oil barons and CEOs, Johnny NotinDebt added, “Of course we’re getting preferential treatment from Congress: we paid for it! Those people at Separation of Oil and State should go buy their own congressman!”

“Price gouging is not a crime,” said Warren Profit of Toledo, Ohio. Perched high in his idling Hummer emblazoned with a Loyal to Big Oil bumper sticker, Profit declared: “I pledge to be Loyal to Big Oil and am asking the American public to do the same.”

Ivana Moore-Enmoore of the Boston Chapter let slip that once the American public has taken the oath, Loyal to Big Oil plans to ask Senators and Representatives in Congress to do the same. “The status quo is good for us, and Congress should be good to the status quo. Today I discovered my Governor hasn’t taken any campaign contributions from Big Oil yet this year. I won’t stand for that kind of disloyalty!”