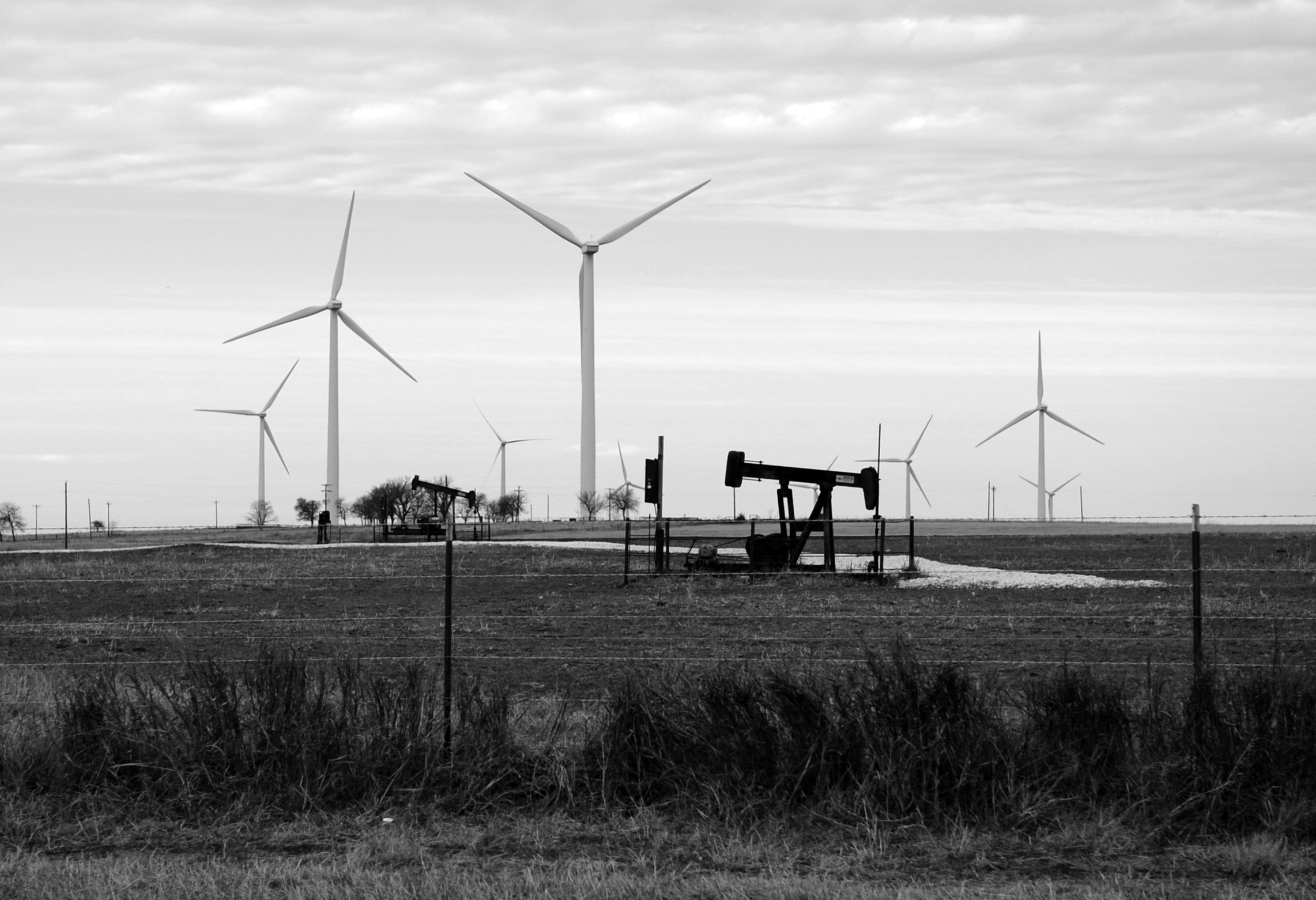 By Greg Muttitt and Sivan Kartha

Staying within climate limits requires restricting fossil fuel extraction as well as demand. But where and how should it be restricted? Our new paper proposes five principles for equitably managing a phase-out of extraction.

The COVID-19 pandemic has shaken up the global energy economy. Wealthy countries have scrambled to support their own fossil fuel industries: Another tar sands pipeline bought with public money in Canada. Bailout funds earmarked for oil and coal companies in the United States. New oil tax reliefs in Norway.

Meanwhile, poor countries are reeling. Nigeria, facing cuts of 25% to government spending, will now will now fall deeper into debt to pay for dealing with the COVID-19 crisis. Iraq’s salaries and social benefits – which depend on oil revenues for 90% of their funding –  will inevitably be slashed this year. And Ecuador, hobbled by budget cuts, has struggled even to bury the dead.

This contrast of Northern governments propping up oil companies, while Southern societies face devastating disruption, shows the perversities of an energy transition that is unmanaged, unjust, and unsustainable.

So what would a sustainable and just energy transition look like? Our new study – published this week in the peer-reviewed journal Climate Policy – aims to answer that.

After consulting with experts, stakeholders, and representatives of a diverse range of groups, we examined how an energy transition would impact workers, communities, economies and governments in fossil-fuel-extracting countries. Based on this review and evaluation of ethical frameworks for managing those impacts, we propose five principles for fairly phasing out fossil fuel extraction:

1. Phase down global extraction at a pace consistent with limiting warming to 1.5°C.

At current rates of emissions, the carbon budget for 1.5°C will last barely a decade. Governments must quickly wind down fossil fuel production to avoid hitting those limits; globally fossil fuels must be largely phased out by the middle of the century.

2. Enable a Just Transition for workers and communities.

The labor movement has led in the fleshing out of what a Just Transition entails: creating decent new jobs (with fair pay, reasonable conditions and union rights) by investing in alternative sectors; retraining transition-affected workers to help them get alternative jobs; protecting the rights and income of workers and communities throughout the transition; and democratically engaging those stakeholders in the process of transition.

In line with environmental justice, ending fossil fuel extraction should be prioritized where pollution destroys livelihoods and health. In cases where extraction violates people’s rights, it should be reformed or stopped immediately.

4. Reduce extraction fastest where social costs of transition are least.

Achieving the Paris goals requires all countries to wind down fossil fuel extraction and use. But this does not mean all must phase out at the same pace, or make the same efforts.  A phase-out will be more socially impactful in countries with high economic dependence on fossil fuels and with limited economic resources to manage it. Wealthier countries should thus phase out extraction fastest.

To illustrate, consider coal mining in Germany compared to China. Coal miners account for 0.03% of Germany’s workforce, compared to 0.6% of China’s. As a proportion of the national workforce, China’s challenge is thus 20 times the size of Germany’s.

Moreover, Germany’s coal mining wage bill amounts to 0.03% of GDP; China’s to 0.5%. Assuming the costs of a Just Transition (such as retraining and social protection) are proportional to the wage bill, this suggests that Germany has sixteen times greater economic resources than China relative to what is needed.

Germany and China thus differ along two important dimensions: the relative scale of the transitional challenges, and the countries’ ability to mitigate and absorb its adverse impacts. The graph below shows the 10 largest coal-extracting countries on these two dimensions. 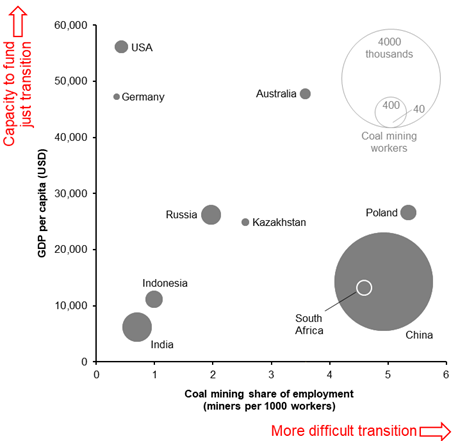 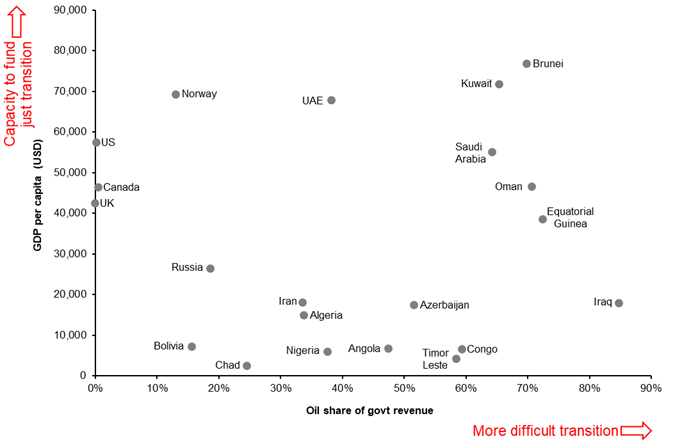 5. Share transition costs fairly, according to ability to bear those costs.

Since the costs of mitigating climate change are incurred for the (global) common good, they should be shared fairly. The largest burden should be borne by those with the broadest shoulders, rather than by those unfortunate enough to be most directly affected.

Even if Northern countries phase out their extraction much faster, extraction-dependent poor countries will have to go through a faster transition than they can undergo unaided: essentially within a generation, and alongside other pressing developmental needs. Financial, institutional and technological support will be vital to enable a just transition in those countries.

As suggested by these two latter principles (4 and 5), the figure below shows what could be expected of different countries.

Last year’s Production Gap Report showed that governments’ plans for fossil fuel extraction massively exceed what would be aligned with the Paris Goals. Too often, governments hide behind a global target, leaving it to others to cut back. Our aim is to suggest some principles by which the global limits might translate into national and regional change.

One immediate conclusion is that much greater efforts are needed from wealthier countries, especially those that claim to be climate leaders. Germany’s 2038 target date to phase out lignite mining looks indefensible. As does the UK’s policy of maximizing oil and gas recovery, and Canada’s public investment in new pipelines to enable tar sands expansion.

Conversely, given the limited carbon budgets, fossil fuel extraction cannot be a viable pathway to socio-economic development: it would instead leave countries with a legacy of stranded assets and unmet liabilities. All countries should begin a phase-out, though poorer countries may move at a slower pace and may require international support.

If a breakthrough is to be politically possible, the task must be approached fairly. And while the initial response to COVID-19 has shown how not to equitably manage the decline of fossil fuel extraction, it has created demands for a different approach. We hope our paper can help inform a fairer pathway to a post-fossil society.

You can read our research paper here.