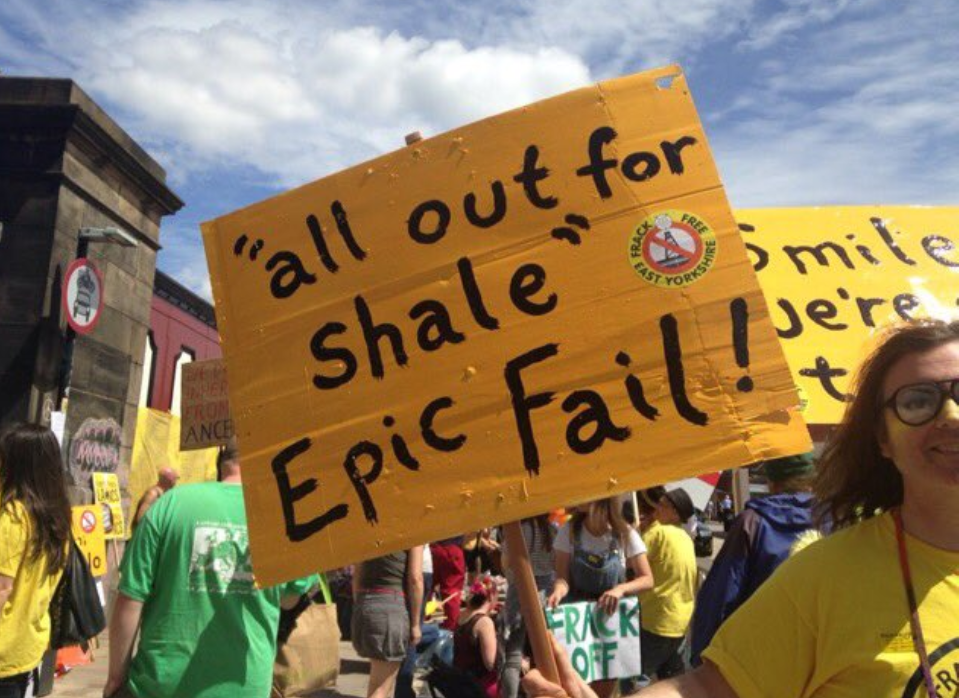 1000 days. Just pause for a moment and think what you were doing a 1000 days ago. It seems a long time, and it is. For over 1000 days, the local community in Lancashire have protested and fought the the fracking company, Cuadrilla, trying to stop the company drilling for shale.

The community repeatedly pointed out that Cuadrilla had no local social license to operate. Its planning application was rejected locally only to be overturned by a blinkered Conservative Government.

As the local protesters, typified by the wonderful Nanas, maintained a protest camp through rain and shine, through hail and snow, through night and day, they said they had the science behind them, they had history on their side. But it was a David and Goliath fight. And as of last Friday, David has won. For now at least.

At midnight last Friday night, the UK government announced that it was “was ending support for fracking with immediate effect.”

It was a U-turn of epic proportions for a Conservative government who repeatedly said that fracking was going to answer all the UK’s energy needs, despite the protests, despite the science that says gas is not clean.

For now, at least, lets take the Government at its word. According to its press release, the Government is ending support for fracking in the UK on the basis of new scientific analysis. This new evidence concludes, “that it is not possible with current technology to accurately predict the probability of tremors associated with fracking”.

This means that “Fracking will not be allowed to proceed in the UK”. The UK Business and Energy Secretary Andrea Leadsom, until very recently one of the cheerleaders for the industry, said: that after reviewing the recent scientific evidence on seismic activity in Lancashire,” it is clear that we cannot rule out future unacceptable impacts on the local community.”

The announcement comes after operations at the fracking site in Preston New Road, Lancashire, were suspended after a magnitude 2.9 event was recorded in August 2019.

The British Prime Minister, Boris Johnson once referred to fracking as “glorious news for humanity” and urged the UK to “leave no stone unturned, or unfracked” to frack large parts of the UK.”

He continued: “In their mad denunciations of fracking, the Greens and the eco-warriors betray the mindset of people who cannot bear a piece of unadulterated good news. Beware this new technology, they wail. Do not tamper with the corsets of Gaia! Don’t probe her loamy undergarments with so much as a finger — or else the goddess of the earth will erupt with seismic revenge.”

Johnson’s comments are interesting not only for their ignorance, but for his contempt for those warning against the risks of fracking. Opponents were pointing to the increasing science that shale gas was not safe, clean or green. They were worried about climate impact, seismic impact, impact on drinking water, and their local communities.

In that sense, the announcement is one massive U turn.

It will be seen as, in the words of the Guardian newspaper, “a watershed moment for environmentalists and community activists and a “crushing blow to companies that had been hoping to capitalize on one of the new frontiers of growth in the fossil fuel industry.”

It was of course welcomed by green groups. Friends of the Earth, chief executive, Craig Bennett said: “This moratorium is a tremendous victory for communities and the climate. For nearly a decade local people across the country have fought a David and Goliath battle against this powerful industry. We are proud to have been part of that fight. “We must now ensure that legislation is passed so that the ban is made permanent.”

Greenpeace’s head of politics, Rebecca Newsom added: “It’s been clear for some time that the government’s big bet on fracking is bust. Opening up a new fossil fuel industry in this climate emergency was always an awful idea, and it’s only seemed worse as the industry has lurched from mishap to disaster.

But to go back to what Johnson dismissed: the seismology. As the Guardian notes, a new report by the semi independent Oil and Gas Authority warned it was not possible to rule out “unacceptable” consequences for those living near fracking sites and it “was not possible to predict the magnitude of earthquakes fracking might trigger.”

The industry always said that fracking was not only safe but precise. The geological equivalent of key-hole surgery. But this was always a lie. I have always said it is a brutal technique, with unpredictable consequences. Oil services giant, Schlumberger, once described it as employing “brute force and ignorance.”

Just days before the UK Government announcement, there was an article run by Bloomberg, entitled: “After Decades of Fracking, We Finally Know How the Fluid Spreads Underground”.

The article reveals just how much uncertainty and risk is involved. “Given how profound an effect hydraulic fracturing has had on the U.S. economically in recent years, it can come something of a shock to discover how little we know about it.”

The report continued: “data from Deep Imaging, a small oilfield technology company in the suburbs of Houston, seems to confirm what many oilfield engineers have feared but couldn’t prove: a typical frack comes with lots of uncertainty—and bears little resemblance to the ideal.”

Deep Imaging used an electromagnetic field to detect the flow of fracking fluid through the Earth’s crust—and their “results show a chaotic scene where fluid spreads unpredictably. Areas of rock affected by fracking are both considerably larger and shorter than planned.”

It is no wonder that the regulators are now saying that they cannot predict what will happen seismically if there is further fracking. The industry does not know. The promise of precision and safety were based on a lie. And one that it took years of community campaigning to expose.

So there are celebrations, but there should also be caution. It is only a moratorium. It is not a ban. Could the Conservatives, if they win the election, just reverse the decision? They know that fracking and climate is an election issue. The issue of shale gas could potentially have influenced 40 marginal seats. So why not diffuse that potential issue with a press release?

As the Mirror newspaper notes today: “Tories accused of ‘election ploy’ after admitting fracking ‘ban’ is temporary.” If it is only temporary, the new research by Deep Imaging should be enough evidence to make it permanent.

There are other issues too. It only covers fracking. As one anti-shale group has pointed out, the Government’s announcement today to end its support for fracking is welcome news, but “the moratorium covers only high volume hydraulic fracturing  .. It does not cover other forms of stimulation of oil and gas wells, including acid stimulation.”

For now lets celebrate. But lets not be complacent. The UK Government should also now stop any outstanding legal action against anti-fracking protesters and repeal any convictions. There is now a petition asking them to revoke the charges and to apologise. They should also award the Nanas for 1000 days of outstanding, unwavering community service. But we know they won’t do this.

Because at the end of the day, we cannot trust the government. As the Conservatives have pushed fracking they have tried to destroy the renewable energy industry in the UK. They have created one of the most favorable tax regimes for oil and gas companies in the world, encouraging further extraction in the North Sea that undermines the UK’s commitment to the Paris Agreement.  They are also still pushing the false solution that is nuclear.

So we have won an important battle, for now at least. But now we must win the carbon war and make sure the fossil fuel industry – in all its forms – heads to the history books.