The World Bank just shook the world of energy finance to its foundations. On December 12, at the One Planet Summit in Paris, the world’s most high-profile public bank said they would no longer finance oil and gas extraction after 2019. This move made headlines around the world, and it was the direct result of sustained pressure from activists and communities fighting to end public finance for fossil fuels.

The announcement is a big deal for three main reasons:

In short, this is a huge step, and it shows incredible climate leadership by the World Bank Group. That said, there’s still much more to do.

There’s still a significant amount of other fossil fuel finance at the World Bank Group that will need to be addressed, including ongoing indirect support for coal through financial intermediaries and development policy finance, as well as other oil and gas finance. Furthermore, the new oil and gas finance restrictions will require strict implementation. And, crucially, other government-backed institutions are still pumping tens of billions of public dollars into oil, gas, and coal each year. 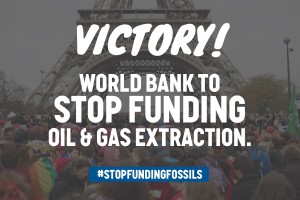 Some outlets have incorrectly reported that the World Bank Group will eliminate only their finance for fossil fuel exploration, but it’s even bigger than that: the World Bank described it as a commitment to end “upstream oil and gas finance,” which means they’re planning to phase out all of their extraction-related finance. If this same provision were applied across all multilateral development banks and G20 public finance institutions, it would result in tens of billions of dollars per year in concessional finance moving out of oil and gas.

The World Bank Group also made additional exciting commitments, including applying a shadow carbon price in their investment decision-making, calculating and disclosing their greenhouse emissions, ramping up their Climate Change Action Plan’s ambition in 2020, and scaling up their green finance.

And they weren’t the only ones taking action at the One Planet Summit: Insurance and investment giant AXA announced they will no longer invest in or provide insurance for companies substantially involved in coal or in Canada’s dirty tar sands, showing that both private and public finance providers are united in their shift away from fossil fuels. It’s worth celebrating these important victories, even as we recognize the scale of the challenge that still lies ahead.

The World Bank Group’s announcement won’t shift the hundreds of billions of dollars flowing into oil and gas capital expenditure overnight. But over time, as the world increasingly realizes that fossil fuel expansion has no place in a world where we plan for success in addressing climate change, we can expect other financial institutions – both public and private – to follow their lead. The global community of people fighting to end government handouts to the fossil fuel industry will make sure of it.