Download the full report, Energy for the Poor? (PDF) 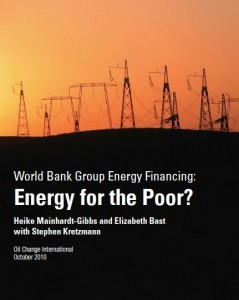 The multiple challenges of energy poverty and climate change are daunting. Globally, more than 1 out of every 5 people lacks access to electricity. Nearly 2 of every 5 still rely on wood and biomass for basic cooking and heating. Many of the people without access to modern energy services live in rural areas of sub-Saharan Africa and Asia. In many cases, these populations will be the same ones that face disproportionate climate change impacts to their agricultural and natural resource-based livelihoods.

Increasing clean energy access is key to confronting a host of development challenges. The World Bank Group (“the Bank”) is well-placed to address energy access and support clean energy, but its current energy lending portfolio remains heavily biased towards conventional fossil fuels instead of on energy access, renewable energy, and energy efficiency.

To conduct this study, the authors completed an independent review of the Bank’s fossil fuel lending for fiscal years 2009 and 2010. They also requested and received from Bank staff the Bank’s own assessment of which of their projects met their own definitions of improving access. There is a high degree of congruence between these two studies, and the analyses differ only in the classification of two natural gas projects.

This study finds that none of the World Bank Group’s fossil fuel finance directly targets the poor or ensures that energy benefits are reaching the poor. Specifically:

An institutional focus by development institutions on energy access projects could begin to fill the financing gap to achieving universal energy access. To meet the most basic energy needs of the world’s population, the International Energy Agency (2010) estimates $36 billion a year is needed in additional financing. Renewable energy projects, like small hydropower, solar, and biomass, are often the most effective solutions for the rural areas where many of those who lack access live.

For the World Bank Group to take advantage of the opportunities around clean energy access, it should:

As it has in the past, the World Bank Group has an opportunity to put its grants, credits, and below-market lending towards projects with positive social and environmental impacts. How the Bank chooses to use its dollars can either support and incentivize energy access and clean energy pathways in developing countries or continue countries on dirty energy pathways that fuel climate impacts, undermining sustainable development and poverty reduction goals.