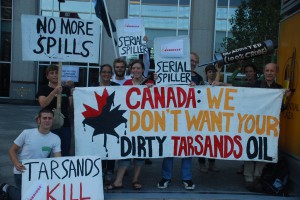 The oil industry is in a surprisingly bullish mood.

As America prepares to go to the polls today in the crucial mid-term elections, Republicans have signalled that, if victorious, they will immediately push to free up exports of gas and oil and pass legislation forcing President Obama to approve the controversial Keystone XL pipeline.

Particularly buoyant are our oil friends from the industry lobby group, the American Petroleum Institute.

Even before a vote has been cast, the API’s boss, Jack Gerard argued yesterday that “we can confidently project American energy is a landslide winner in the 2014 midterm elections.”

Even by Jack’s usual standards of hyperbole, this is quite a statement.

The Canadians too are beginning to sound bullish about getting their dirty tar sands oil to market. Earlier this week, Alberta Premier Jim Prentice bragged that tar sands producers would be able to supply Gulf Coast refineries regardless of how President Obama rules on the Keystone XL pipeline.

“The debate about Keystone is not a debate about whether … Canadian crude can make its way to the Gulf Coast,” said Prentice.

And the reason is trains, which the Canadians argue could be used to chug tar sands crude through the whole of Middle America. The other idea for the Canadians is to use the proposed Energy East pipeline, which would run over 2,900 miles to Atlantic coast refineries.

According to oil industry bosses in Canada, about half of Energy East’s volumes could probably be exported from Canada to markets including the Gulf Coast. Using trains or Energy East  would only cost about $2 to $3 a barrel more than Keystone XL and could readily be absorbed.

But of course it is not that simple. Actually it’s the anti-oil protesters who are winning.

Last week a new report was published by the Institute for Energy Economics and Financial Analysis (IEEFA) and Oil Change International which quantifies for the first time the financial and carbon impact of public opposition to pipelines and other investment in the tar sands.

Whilst that is one huge amount of cash, a further $13.8bn has been lost because of other changes in the North American oil market, it argued.

Kretzmann added “Legal and other challenges are raising new issues related to environmental protection, indigenous rights and the disruptive impact of new pipeline proposals. Business as usual for Big Oil – particularly in the tar sands – is over.”

Apart from popular protests, the other reason the industry is in trouble is price. As I have explained before “many shale oil plays and tar sands investments need a high oil price to be profitable. And if the oil price keeps plummeting, it could be bad news for both.”

As the US shale boom forces prices down, many people are watching what Saudi Arabia will do and whether it will curb production to force prices up.  However this morning oil prices fell sharply after Saudi Arabia yesterday lowered the price it charges customers in the US in an effort to prop up its share of the American market.

According to the Financial Times West Texas Intermediate was 2 per cent down in early trading to a three-year low of $77.20 a barrel, whilst benchmark Brent Crude was also 2 per cent down to $83.12.

This falling price – coupled with the growing grassroots mobilisation against tar sands and fracking – means that actually it’s the anti-oil movement who, for once have reason to be cheerful, no matter what happens in the Mid-Term elections.